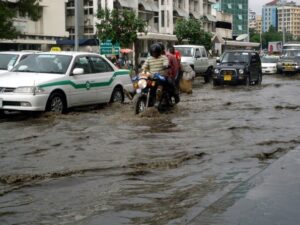 A motorcyclist negotiates his way through a flooded road along Bibi titi Mohamed street in Dar es Salaam, following a heavy downpour in March 2014. THOMSON REUTERS FOUNDATION/Zuberi Musa[/caption] Dar es Salaam — Tanzania’s largest commercial city – one of the fastest-growing in Africa – has redrawn its master plan to try to become a megacity prepared for climate change, and not a city of worsening urban sprawl and flooding. The plan, which looks ahead to 2036, aims to transform the city of over 4.5 million people and proposes creation of a Metropolitan Development Authority to oversee planning and major infrastructure development, including transportation and utilities. It calls for measures to mainstream climate change adaptation into existing urban development policies, for instance constructing better storm-water drainage systems for a city increasingly hard-hit by flooding, and relocating residents from areas with high flood risk. The authority would have powers to veto planning decisions by lower municipal councils that are inconsistent with land-use policies for the city. Said Meck Sadick, Dar es Salaam Regional Commissioner, told Thomson Reuters Foundation that the government wants to see Dar es Salaam grow into a megacity with ultra-modern institutions, industries and facilities to attract investment and accommodate an ever-increasing population. The success of the plan, however, depends on enforcing regulations and stopping continued construction of buildings in flood-prone and other prohibited areas, Sadick said. Fast-growing Dar es Salaam generates over 40 percent of Tanzania’s GDP but is exposed to a range of risks from climate change, including flooding, sea level rise, coastal erosion, water scarcity and insect-borne diseases. 10 MILLION BY 2040 According to a government study in 2011, Dar es Salaam is poised to become a megacity with over 10 million people by 2040. Even today, about 140,000 people live in flood-vulnerable areas, with 31,000 people considered at high risk. As the number of people living in slums with poor access to water and sanitation continue to rise, Dar es Salaam epitomises the growing challenges of dealing with urbanisation, poverty and natural disasters, according to experts at ICLEI, a network of more than a thousand cities working on sustainable development and resilience issues. The government estimates that nearly 70 percent of the inhabitants of Dar es Salaam live in informal settlements and urban slums situated in marginal areas at the risk of flash flooding. According to the Resilient Cities Congress Secretariat’s report for 2013, steering development away from high risk areas is one of the most effective ways to limit the costs of extreme weather in the future. However, Silvia Macchi, an associate professor of urban planning at Sapienza University in Italy who has worked on climate change adaptation in Dar es Salaam, said the city’s new plan does not focus sufficiently on long-term climate threats and misses “an opportunity for reshaping urban policy and the city itself” to build resilience to climate change. “Although reference is made to (climate change adaptation) as a key focus of the proposed urban development strategy, no consideration is given to slow and incremental climate change impacts such as seawater intrusion in the coastal aquifer” and the city’s water supplies, she said in an email. That oversight is “probably due to the complex nature of problems faced in Dar,” she said. But city officials in the plan “did not actually change their way of looking at the city,” she charged. Such long-term changes are already affecting people living in the coastal plain of Dar es Salaam, who are increasingly turning to rainwater harvesting as their groundwater supplies become saline, and trying to diversify their sources of income to better face increasing environmental pressures. The city’s new plan should recognise that “such practices represent a valuable resource for resilience planning,” she said. RELOCATION FROM INFORMAL SETTLEMENTS One problem facing officials in Dar es Salaam and other large cities, the ICLEI report noted, is how to enforce land use policies in cities where informal settlements dominate. As part of climate resilience efforts, which include things like construction of a sea wall, mangrove planting and better drainage, the government has relocated 654 families whose homes were engulfed in water in 2011 floods. They were given 100 square-metre plots 35 kilometres from the city centre. In an interview with Thomson Reuters Foundation, Aziza Ali, one of those relocated, said securing a plot of her own was good news, but she can no longer carry on with her cooking business because she is so far away from her former clients in the city. “Transport is the main problem here. I can’t afford Tsh.3,000 ($2) for the bus fare to go to town every day,” she complained. Her family is also still living in the tent the government provided when they made the move in 2011. “I was given 100 bags of cement and iron sheets when the president came to see us but since I don’t have the money to build a house, I ended up selling the materials to feed my family,” she said. Sadick said efforts to relocate informal settlement dwellers out of flood-risk zones are hampered by lack of funding and suitable relocation sites. Many people also prefer to live in the city centre close to services and economic activities, he said. As part of the new master plan, city authorities are implementing a multi-million-dollar low-carbon transport project, which aims to bring state-of-the-art, high-capacity commuter buses to bring people on the city’s fringes into the centre each day for work. * Source Thomson Reuters Foundation. Kizito Makoye is a journalist based in Dar es Salaam, Tanzania. He reports on climate change and governance issues.]]>