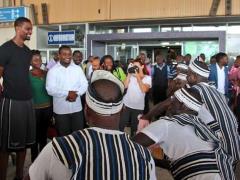 Bosh, who plays for Miami Heat, will spend five days in the Ghana between July 10-14, 2014 where he will interact with players and officials in the continuation of the promotional drive. The 30-year-old, who is joined by a delegation from NBA Africa, will have discussions with the Ghana Basketball Association, participate in player clinics and familiarize themselves with the current status of the growing sport in the country. The first session will take place on Friday July 11 at the Aviation Social Centre in Accra from 1pm where players drawn from the Greater Accra region will be exposed to some new basketball knowledge by Chris Bosh and the NBA Africa team. The team will then move to Cape Coast on Saturday for a similar exercise at Adisadel College to assess the level and shared knowledge. The two-day event forms part of a screening exercise to select a player to represent the country at the 2014 Basketball Without Borders programme in South Africa in August this year.  Talented Ghanaian youngster Philip Osafo, who attended Kings College in Kumasi, participated in the annual event last year after impressing during the maiden edition of the Sprite Ball Clinic in Ghana. Chris Bosh visit follows last year’s edition with Chicago Bulls Luol Deng and former Toronto Raptors player Pops Mensah-Bonsu. There is tremendous potential for basketball success in Ghana and the clinic will provide the NBA with an opportunity to evaluate the level of talents in the country. The visit of the Chris Bosh will inspire the basketball community to pursue excellence on the court and other field of endeavours. This visit is made possible by the collaborative effort of Coca- Cola Company, NBA Africa, the Ghana Basketball Association and enabled by Rite Multimedia. NBA Africa is collaborating with their local partners Coca-Cola and the Ghana Basketball Association to bring you the 2014 Sprite Ball Clinic, which is organized by Rite Multimedia. *modernghana]]>