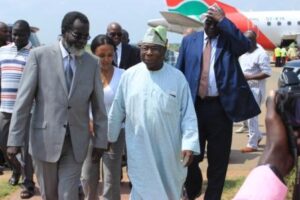 Juba — The chairperson of the African Union Commission of inquiry in to South Sudan crimes said his team would not “shy away” from visiting areas most-affected by conflict in the country. “We will not shy away from any place because of clashes because that is the mandate of our commission,” former Nigerian leader, Olusegun Obasanjo told reporters on arrival to the South Sudan capital, Juba Monday. “Our commission is mandated to healing, reconciliation, accountability. If we do not go round, how do we know where bleeding is so that we can advise [on] how to stop the bleeding and to get process of healing? That is what we are up to; to go everywhere,” he added. Obasanjo, on a five-day visit to the young nation, said members of his commission would tour Upper Nile, Unity and Jonglei states as part of its mandate in the war-torn country. He however said the five-member body needs support from both warring parties to properly carry out its investigation work. “But we need to do more and that is why we are here and that is why I am appealing that I hope to see support and respond we have got so far. The job we are given is not an easy job,” said Obasanjo. Established by the AU Commission chairperson on 6 March, the commission of inquiry was tasked to investigate the human rights violations and other abuses committed during the armed conflict in South Sudan. 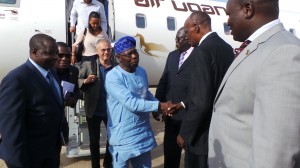 The commission is mandated to make recommendations on the best ways and means to ensure accountability, reconciliation and healing among all South Sudan communities after collecting and review all available documentation pertaining to the human rights situation in South Sudan, including United Nations reports and those gathered by national and international specialists and non-governmental organisations Meanwhile, South Sudan’s deputy foreign minister, Peter Bashir Gbandi Obasanjo and team would have unrestricted to the country hit by last year’s outbreak of violence in the capital, Juba. *Source allafrica.com]]>