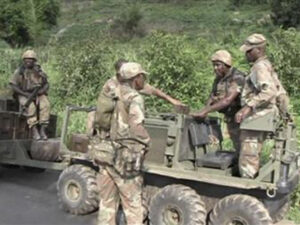 Despite losing 15 soldiers in the Central African Republic (CAR), South Africa has not ruled out a return to the war-torn country. Speaking to journalist before the debate on the Budget Vote of the Department of Defence and Military Veterans in Parliament on 23 July, Minister of Defence and Military Veterans Nosiviwe Mapisa-Nqakula noted that a number of countries had already deployed into the area. She noted that substantial organisation and proper command and control of the forces on the ground were required. “To add another force,” she said, “would it make a difference?” “Obviously, if the African Union were to take a decision, or even the UN would take a decision that forces, including South Africa, are required to go into the Central African Republic, we may actually have to consider that,” she stated. It was important in terms of South Africa’s foreign policy objectives to build a peaceful Africa. As a result, South Africa may have to deploy in support of those foreign policy objectives. Despite these objectives, it was up to the SANDF to advise the President, as Commander in Chief, whether the SANDF’s state of readiness is such that they would be able to deploy or not. Summing up, Mapisa-Nqakula said that the President would have to consider all the information at his disposal, including the scale of the deployment. “Because to deploy does not mean necessary to put boots on the ground all the time,” Mapisa-Nqakula explained, “We may actually go in as advisers in the reconstruction and development of that country and so on.” For now, South Africa and the SANDF are not involved in the Central African Republic. It would appear that the state of readiness and capability (or lack thereof) of the SANDF will have as much a say as to whether another deployment to CAR is forthcoming as any foreign policy initiative. South African troops were deployed to the country in March 2007 as part of Operation Vimbezela, the mission to assist the government of then President François Bozizé with training the Armed Forces of the Central African Republic (FACA) and the refurbishment of military facilities. In late 2012, a coalition of rebel groups under the name of Séléka renewed fighting, with Bozizé requesting international assistance to help with the rebellion. By December 2012, the situation on the ground had worsened to such an extent that an additional 200 soldiers were deployed the following January to protect the small group of South African troops already on the ground. In March 2013 Seleka rebels clashed with South African troops as they rebels marched towards the capital Bangui, unchecked by African Union (AU), Chadian and French forces. South African troops were caught in an ambush, but acquitted themselves well, killing or wounding an estimated 700 rebel fighters, for the loss of 13 SANDF troops (two later died of their injuries). Bozize was overthrown and the South African government withdrew its remaining forces. It was South Africa’s heaviest military loss since the creation of the South African National Defence Force (SANDF) in 1994. Despite numerous changes of governments since what became known in South Africa as the Battle of Bangui, chaos has reigned in CAR. Thousand s have been killed in the country, despite the presence of several thousand African Union peacekeepers and European Union and French troops. In addition, Ugandan troops have been in CAR hunting down Ugandan Lords Resistance Army rebels. Given South Africa’s history in the CAR, it is understandable that South Africa is reluctant to re-enter the fray. *Source defenceweb]]>