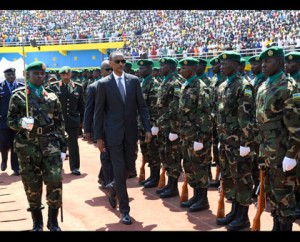 President Kagame inspects a Guard of Honour mounted by the Rwanda Defence Forces at Amahoro Stadium yesterday. Village Urugwiro.[/caption] President Paul Kagame has paid tribute to Rwandans who dedicated themselves to the struggle to liberate their country, whether on the battlefield or through grassroots education or those who gave their resources. “Today we remember all of them in a spirit of gratitude,” he said in his 20th Liberation Anniversary speech to the nation at Amahoro Stadium in Kigali yesterday. “Rwandans stand together today as a people united, liberated and focused, as never before – on attaining the future we want,” he said. Kagame said: “The losses endured by every Rwandan family strengthen our resolve to safeguard the gains we have made. But we did not work to spare Rwanda’s children from war so that they take peace for granted”. Kagame reserved a special praise for the country’s armed forces, saying they give “their all to protect our constitutional order, in close partnership with the people”. As our struggle taught us, the people’s trust is the true foundation of nation-building, he said. “I thank them for their patriotic service…” The Head of State said that Rwanda is a more unified, peaceful and focused country 20 years after Rwandans paid great sacrifices to stop the Genocide against the Tutsi. But he warned that liberation is not an end in itself but rather “an attitude that inspires everything that we do and without which we can’t succeed”. Kagame warned against the pitfall of blaming the legacy of European colonisation and past wrongs for today’s failures. “Nothing about the past is an excuse for failure, even where real wrongs were done. The countless young Rwandans and Africans I have met lack nothing. They can deliver the future we want, if we hold each other accountable for it.” In attendance were Presidents Yoweri Museveni of Uganda, Uhuru Kenyatta of Kenya and Salva Kirr Mayardit of South Sudan, Burundian First Vice-President Prosper Bazombanza, Mama Maria Nyerere, the widow of the late Tanzanian leader Julius Nyerere, among other guests from around the continent. He said Africans “tolerate mediocre implementation, even though we are very capable people, and avoid taking responsibility, even though it is we who pay the price for failure.” Kagame, who led the Rwanda Patriotic Army to the historic July 4, 1994 triumph, effectively bringing to an end the Genocide against the Tutsi, said even as the liberators embarked on an armed struggle to liberate the country they were cognizant of the need for Africa to reclaim its dignity. He challenged Rwandan and African youth in general to rise to the occasion and carry on with the liberation struggles. “Soon enough, they will have to step up and take responsibility. We must ensure that they are ready.”   http://www.youtube.com/watch?v=0SLli-eh_Dw Liberation events were held across the country and in Rwandan communities across the world. In Kigali, the day began with the unveiling of the Campaign Against Genocide Monument at the Parliamentary Buildings in Kimihurura, where the 3 battalion of the Rwanda Patriotic Army stayed for months just as the Juvenal Habyarimana regime prepared the Genocide. These 600 soldiers would later play a key role in rescuing people around Kigali when the killings were set in motion on the night of April 6, 1994, moments after Habyarimana was assassinated by extremists within his ruling MRND party to create the excuse for genocide. This RPA battalion went on to secure the Amahoro stadium – the venue for yesterday’s national Liberation event – which hosted refugees from around Kigali as then government soldiers and Interahamwe militia continued to comb the capital, killing their targets. Thousands of people who attended the ceremonies at the Amahoro stadium yesterday were wowed by the Armed Forces parade and performances, which attracted able-bodied servicemen and women as well as war casualties in wheelchairs. Young Rwandans also recited a poem that expressed gratitude and admiration for the country’s liberation heroes. Rwandan artistes also performed songs celebrating the country’s rebirth, with pledges such as “you won’t miss anything Rwanda.” Kenyan President Uhuru Kenyatta, who is also current chairperson of the East African Community, the five-nation region group which Rwanda subscribes to, pledged his country and EAC’s continued support to the people of Rwanda. “Our delay and inaction in your hour of need are a standing reproach. We could have done more, sooner,” he said in reference to the failure by the region and the international community to stop the Genocide, which would claim the lives of more than a million people in 100 days. He added: “We work together to strengthen regional security in the knowledge that peace is the fundamental demand of our citizens, in whose absence all our works turn to ash,” Kenyatta said. As part of a raft of integration deals, Kenya, Rwanda and Uganda and Kenya this year signed two key pacts to strengthen mutual cooperation in the areas of defence and security as a way of protecting socio-economic gains made. In a message of solidarity read out by Rwanda’s Minister for Foreign Affairs, Louise Mushikiwabo, South Sudanese President Salva Kiir Mayardit extended well wishes from the people of the world’s newest nation, where Rwanda maintains more than 1,600 peacekeepers. See also, Kagame and Kenyatta’s speeches during Rwanda’s Liberation day *newtimes]]>