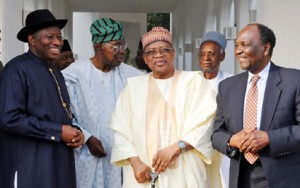 The council, made up of past presidents, state governors and leaders of parliament, is “satisfied the security agents know very well where the girls are located,” Gov. Godwill Akpabio told reporters at a briefing.

The rescue of the girls was top of the agenda at the meeting Tuesday, he said, and “military authorities also confirmed that efforts were being made and that very soon we will have good news.”

The governor added the question is not whether the girls can be rescued but how to do it without endangering their lives.

He said the council, which was addressed by President Goodluck Jonathan and his national security advisers, was left confident that the president and the military are “on top of the situation.”

Tuesday’s council commended Nigeria’s military and security agents, who have been roundly criticized at home and abroad for their failure to swiftly rescue the girls and to curb an escalating Islamic uprising by Boko Haram that has killed thousands. Some 276 schoolgirls were abducted April 15 from a school in northeast Chibok town. Dozens escaped and 219 still are missing. 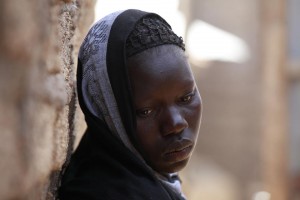 FILE-In this file photo taken Monday, May 19, 2014, Solome Ishaya, sister of kidnapped school girls Hauwa Ishaya stands outside their family house in Chibok, Nigeria, on Tuesday, July 8, 2014, council commended Nigeria’s military and security agents, who have been roundly criticized at home and abroad for their failure to swiftly rescue the girls and to curb an escalating Islamic uprising by Boko Haram that has killed thousands. Some 276 schoolgirls were abducted April 15 from a school in northeast Chibok town. (AP Photo/Sunday Alamba,File)[/caption]

Last week the Defense Ministry reported the detention of a businessman heading a “terrorists’ intelligence cell” who it said “participated actively” in the Chibok abductions.

Negotiations to free the girls without a fight appear to have stalled, with Boko Haram demanding the release of detained extremists in exchange for the girls. Jonathan has rejected those demands.

Boko Haram leader Abubakar Shekau has threatened in a video to sell the girls into slavery and as child brides if his demands are not met. In the video, some of the girls say they have converted from Christianity to Islam.

The extremists are believed to have divided the girls into smaller groups being held at different camps and possibly across borders in Cameroon and Chad, where sightings have been reported. There also have been reports that some of them have been forced to marry their captors.

Boko Haram has been kidnapping people for more than a year but received international condemnation for the mass abductions of the Chibok girls, which has led to a worldwide movement called #BringBackOurGirls.

Boko Haram — which means “Western education is sinful” — had attacked many schools and killed hundreds of students, some burned alive in dormitories.

This year the extremists have launched a two-pronged strategy of bombings in cities and towns and a scorched-earth policy in villages where they kill residents, set huts and shops aflame and steal livestock and food supplies. Hundreds of thousands of people have been made homeless *Source AP/Yahoo]]>