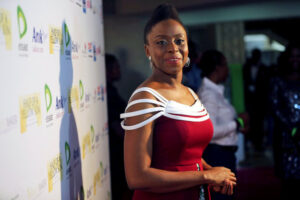 Chimamanda Ngozi Adichie at the premiere, in Lagos, Nigeria, of the film “Half of a Yellow Sun,” based on her novel.
AKINTUNDE AKINLEYE / REUTERS[/caption] More than a decade ago, when the young Nigerian writer Chimamanda Ngozi Adichie was struggling to get her first novel, “Purple Hibiscus,” published, an agent told her that things would be easier “if only you were Indian,” because Indian writers were in vogue. Another suggested changing the setting from Nigeria to America. Ms. Adichie didn’t take this as commentary on her work, she said, but on the timidity of the publishing world when it came to unknown writers and unfamiliar cultures, especially African ones. These days she wouldn’t receive that kind of advice. Black literary writers with African roots (though some grew up elsewhere), mostly young cosmopolitans who write in English, are making a splash in the book world, especially in the United States. They are on best-seller lists, garner high profile reviews and win major awards, in America and in Britain. Ms. Adichie, 36, the author of “Americanah,” which won the National Book Critics Circle Award for fiction this year, is a prominent member of an expanding group that includes Dinaw Mengestu, Helen Oyeyemi, NoViolet Bulawayo, Teju Cole, Yvonne Adhiambo Owuor and Taiye Selasi, among others. There are reasons for the critical mass now, say writers, publishers and literature scholars. After years of political and social turmoil, positive changes in several African nations are helping to greatly expand the number of writers and readers. Newer awards like the Caine Prize for African Writing have helped, too, as have social media, the Internet and top M.F.A. programs. At the Iowa Writers’ Workshop, black writers with recent African roots will make up more than 10 percent of the fiction students come September. Moreover, the number of African immigrants in the United States has more than quadrupled in the past two decades, to almost 1.7 million. And publishing follows trends: Women, Asian-American, Indian and Latino writers have all been “discovered” and had their moment in the sun — as have African-Americans, some of whom envy the attention given to writers with more recent links in Africa. “People used to ask where the African writers were,” said Aminatta Forna, author of “The Hired Man” (2013, set in Croatia). “They were cleaning offices and working as clerks.” [caption id="attachment_10239" align="alignright" width="190"]

The Ethiopian-born novelist Dinaw Mengestu in 2010, when his book “How to Read the Air” was published.
ED OU FOR THE NEW YORK TIMES[/caption] Some writers and critics scoff at the idea of lumping together diverse writers with ties to a diverse continent. But others say that this wave represents something new in its sheer size, after a long fallow period. (There were some remarkable exceptions, like Wole Soyinka’s 1986 Nobel Prize in Literature and Ben Okri’s 1991 Booker Prize.) And it differs from the postcolonial wave, roughly beginning in the 1960s, which brought international acclaim to writers like Chinua Achebe and Nuruddin Farah, among others. There are more women, for one thing. More important, the stories being told, while sometimes set in Africa, often reflect the writers’ experiences of living, studying or working elsewhere and are flecked with cultural references — and settings — familiar to Western audiences. Ms. Adichie’s “Americanah” chronicles the lives of Ifemelu and her lover, Obinze, whose adventures take them from Nigeria to America and Britain. In the United States, Ifemelu writes a popular blog about her growing racial consciousness and finds love with American men, both black and white. Back in Nigeria, her friends use the word “Americanah” to tease her about her Americanized attitudes. Ms. Adichie, who divides her time between the United States and Nigeria and runs a summer writing workshop in Lagos, has now written three well-received novels and a book of stories. She has amassed awards and has a movie adaptation this year of her novel “Half of a Yellow Sun,” about the Biafran war. She even made it into a Beyoncé song: “Flawless,” released in December, sampled several lines about feminism from a public lecture she gave. The success of “Half of a Yellow Sun” (2006), after the critical embrace of “Purple Hibiscus” (2003), was a major factor in sending publishers scrambling to find other talented African writers. The flowering of new African writers is “an amazing phenomenon,” said Manthia Diawara, a professor of comparative literature and film at New York University. “It is a literature more about being a citizen of the world — going to Europe, going back to Lagos,” he said. “Now we are talking about how the West relates to Africa and it frees writers to create their own worlds. They have several identities and they speak several languages.” But for all the different themes and kinds of writing, the novelist Dinaw Mengestu said that he saw a thread. “There’s this investigation of what happens to the dislocated soul,” said Mr. Mengestu, 36, the author of “All Our Names” and a MacArthur “genius” award winner, who was born in Ethiopia but left at age 2 and grew up in Illinois. The novelist Okey Ndibe, 54, said for his part, “My reflexes are shaped mostly by life in Nigeria, but so many aspects of me are in the American mode.” His second novel, “Foreign Gods, Inc.,” is about an educated Nigerian in New York eking out a living as a taxi driver. Mr. Ndibe, who arrived in America in 1988, said that as someone coming from a place where being black was the norm, he became fascinated by the experience of American blacks. “My protagonist’s life in America is as important as his life in Nigeria, if not more so,” he said. [caption id="attachment_10240" align="alignleft" width="190"]

Ishmael Beah, the author of a memoir about the Sierra Leone civil war and now a novel, “The Radiance of Tomorrow.”
MARK LENNIHAN / ASSOCIATED PRESS[/caption] Jonathan Galassi, the president and publisher of Farrar, Straus and Giroux, agreed that “there is a new, self-aware internationalism” and “a much more welcoming interest” in this country, too. Earlier generations, he added, “had it much harder.” Breaking in isn’t getting easier for everyone, however. Some professionals in the book world say that too many literary publishers would rather put out work by writers from Africa than work by African-Americans because in the current climate the Africans are considered more appealing for what is seen as a “black slot.” Marita Golden, an African-American writer who is a founder of the Hurston/Wright Foundation, which supports black writers around the world, acknowledged that those sentiments exist but disagreed with them. “Black writers operate within a small, culturally defined sphere,” she said. “That space is not defined by us, so with any shifts people may feel victimized or that they’ve lost, or they’re experiencing a deficit.” Ms. Adichie said she understood those feelings, too. “In the U.S., to be a black person who is not African-American in certain circles is to be seen as quote-unquote, the good black,” she said. “Or people will say, ‘You are African so you are not angry.’ Or, ‘You’re African so you don’t have all those issues.’ ” Publishers, not surprisingly, tend to disagree with the idea that African-American writers are being overlooked now. “Hogwash,” said Robin Desser, vice president and editorial director at Alfred A. Knopf and Ms. Adichie’s editor. “When the next Toni Morrison comes around I can say that publishers will go crazy.” Given the inroads they have made and the new roots they have planted, African writers say they have proved they are much more that a trend. “My hope is we all become part of the canon, not just here but internationally,” said Ishmael Beah, 33, who lives in the United States. His 2007 memoir, “A Long Way Gone: Memoirs of a Boy Soldier,” about Sierra Leone’s civil war, was a best seller. His novel, “Radiance of Tomorrow,” about the aftermath of that conflict, came out this year. “We all have a lot to say,” Mr. Beah said, “and we realize that we have to speak for ourselves about the diversity, the difficulties, the beauty of this continent.” *Source NY Times]]>