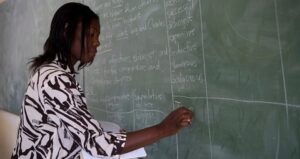 A TEACHER IN NAMIBIA. PHOTO©WORLD BANK[/caption] Sub-Saharan Africa is about to face a major shortage of teachers, says the United Nations Educational, Scientific and Cultural Organisation (UNESCO). UNESCO’s newly released data show that about one third of the countries in the region will face pressure in the coming years to hire more teachers due to a rising demand for education from an increasing school-age population. As a result, the region will need about 2.1 million new teaching posts while filling another 2.6 million vacant positions as many will leave the profession due to attrition from retirement or sickness. Some countries are already making efforts to prevent such an outcome. Ethiopia, for instance, has been expanding its teachers’ workforce by an average of 11% per annum since 1999. Analysts believe this rate could enable the country to meet the challenges of a future shortage. Cameroon, Namibia and Lesotho have also taken steps to increase the number of teachers, according to the UNESCO Institute for Statistics 2013 study, “Projecting Global Teacher Needs from 2015 to 2030”. As a result, these countries should be able to attain the Millennium Development Goal of universal primary education. Before the recent political unrest, the situation in Central African Republic was slightly different as the country was recruiting teachers at a rate of 10% per annum. There are now fears that the ongoing fighting, if not stopped, could affect recruitment efforts. But the trend is worsening in other countries. More children in Cote d’Ivoire, Eritrea, Malawi and Nigeria will need extra primary school teachers by 2030 than they currently do. In Eritrea, for example, out of every seven teachers recruited, 10 are expected to leave, notes the UNESCO study. On the other hand, Mauritania is catching up and may close the gap by 2015 while Djibouti faces one of the biggest challenges as only 54% of primary school-age children are enrolled. To attain the goal of universal primary education, Djibouti will need to recruit about 17% more teachers each year between now and 2030. Many believe this is unlikely to happen because the country doesn’t have the resources to hugely expand its workforce, which means it will inevitably face an acute teacher shortage by then. While sub-Saharan Africa accounts for 46% of the global shortage of lower secondary school teachers, the data also show that governments that have started to make serious efforts to confront the problem will be in a better position to assure quality and universal education by 2030. *theafricareport]]>