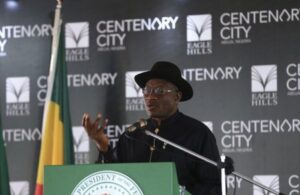 Nigeria’s President Goodluck Jonathan speaks during the groundbreaking ceremony of the Centenary City project in Abuja[/caption] Facing censure at home and overseas for a perceived failure to protect civilians from violent Islamists, Nigerian President Goodluck Jonathan has launched an international media offensive to try to turn the tide of public opinion in his favor. But those efforts have backfired abroad, where many greet his defense with scepticism, and at home, where he was slated for hiring U.S. public relations (PR) firm Levick for $1.2 million, in what critics called a waste of money. Jonathan, and Nigeria as a whole, have suffered a worsening image problem since Islamist militant group Boko Haram kidnapped more than 276 school girls from the northeast village of Chibok, Borno state, in mid-April. Over 200 remain in captivity. The attack overshadowed Nigeria becoming Africa’s biggest economy after a GDP rebasing in April, and its hosting of the World Economic Forum in May. Security is a major headache ahead of national elections in February that are likely to be the closest-fought since democracy returned in 1999. An opinion piece by Jonathan in the Washington Post last month – in which the president wrote “nothing is more important than bringing home Nigeria’s missing girls,” but added that he had to “remain quiet” for their safety – drew open scorn. Soon after, the Washington Post’s Karen Attiah published a satirical send-up of Jonathan’s op-ed. Her piece included lines such as: “Nothing is more important than stopping the machinations of Boko Haram, except maybe my desire to keep up appearances and show the international community that Nigeria was winning the war against the group.” Analyst Bismarck Rewane, CEO of Lagos-based consultancy Financial Derivatives, thinks the president’s timing was wrong. “That op-ed backfired partly because the negative narrative was still so strong,” he told Reuters. “But often the PR guys advising want the upfront fees and don’t care about the result.” Jonathan’s media team declined to comment on their PR strategy. A presidency source confirmed Levick’s contract but said such PR initiatives were standard practice for governments. “All over the world governments engage PR firms and lobbyists to achieve certain objectives within a particular time frame,” the source, who declined to be named, told Reuters. In this case those objectives involve reversing months of damaging publicity over the Chibok girls’ abduction, magnified by a #BringBackOurGirls Twitter campaign that drew in celebrities including Michelle Obama and Angelina Jolie. In the past week Jonathan’s articulate and Washington-savvy Finance Minister Ngozi Okonjo-Iweala has toured the world doing press interviews, for example with CNN’s Christine Amanpour. These often include earnest assertions that the Nigerian president is “doing his best” to get the girls back. Ultimately, the bad publicity is unlikely to doom Jonathan’s 2015 re-election chances. In Nigeria, patronage can produce a ballot win more reliably than perceived performance, analysts say, as was proved in last month’s governorship poll in southwestern Ekiti state. There, incumbent Kayode Fayemi, a well-spoken reformer with a track record of improving services was ousted by a populist former governor from the ruling party whose team gave out tens of thousands of bags of rice to voters ahead of the poll. “BATTERED IMAGE” Jonathan’s supporters and the army – the defense spokesman did not respond to a request for comment – see PR as a key part of the war against Boko Haram. They view each negative report on the security forces or president as a psychological victory to the “terrorists”. And there have been a lot of them. First the military was pilloried for not protecting the Chibok school or responding quickly enough to a distress call. Then the absence of information on the girls’ whereabouts – and a bungled statement from the military briefly claiming to have rescued them from which it later edged away – worsened things. Footage circulating showing Jonathan dancing at a political rally in the northern city of Kano shortly after the mass abduction didn’t help, neither did comments from Jonathan’s wife Patience, in which she publicly told the protesting parents of the abducted girls in the capital Abuja to “go back to Borno.” “No PR firm can save Jonathan’s battered image,” Jibrin Ibrahim, director of the Center for Democracy and Development (CDD), a Nigerian NGO, wrote in the local Premium Times website. “Forget the public relations firm and concentrate on the task … The government did nothing for over three weeks.” Jonathan’s administration says that is unfair, arguing it faces an enemy that is mobile over a wide, remote area and with a track record of wanton killing of civilians, so any rushed rescue could end up in a bloodbath. But few are convinced. “Best wishes to Levick, merely the latest in a long line of Western image consultants that Nigerian governments have been known to routinely engage for miracle-working purposes,” popular blogger Tolu Ogunlesi wrote in local daily The Punch last week. Ogunlesi told Reuters that “this time the stakes are so much higher. You’re dealing with a major national embarrassment.” A weak response is to always deflect blame for Nigeria’s problems onto foreign elements, Ogunlesi added, such as Jonathan describing Boko Haram as al Qaeda in West Africa. REVERSED PERCEPTIONS Ironically, many of the characteristics for which Jonathan is now being publicly vilified – a perceived indecisiveness and weakness in the face of a determined foe – were what initially attracted voters fatigued with decades of bullying strongmen. His initial humility, quiet demeanor, apparent openness to listening and an unpolished manner of speaking may at first have won Nigerians over. Now they cringe when he mumbles on international TV. “He was something refreshing at the beginning,” Nigerian columnist Cheta Nwanze told Reuters. “But the office of the president is supposed to carry a lot of weight. Damage has been done by his being exposed to ridicule.” *Reuters]]>