As the 2014 FIFA World Cup climaxes in Brazil, supplanting South Africa as the latest sucker host nation, South Africans reflect on its lousy legacy and Berliners shrug their shoulders knowingly. The World Cup is a rip-off, so why do nations fight to host it?   By Brent Meersman* [caption id="attachment_10346" align="alignleft" width="300"] 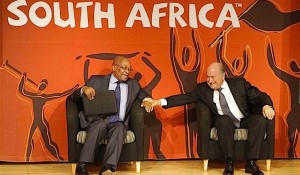 FIFA President Sepp Blatter (R) and South African President Jacob Zuma give a press conference in Johannesburg on 12th March 2010. Photo: AP[/caption] Perhaps only an economist – the type of financial wizard that gave us the global economic meltdown – is able to convince people in the face of all the evidence that hosting the FIFA World Cup makes any financial sense at all. The figures are pure fantasy. Just as Tom Waits sings – what the big print giveth the small print taketh away – so the accounting firms commissioned by greedy politicians seeking popularity, and FIFA and global corporations seeking stupendous profits, put disclaimers in fine print knowing their wholly unscientific projections will almost certainly be rubbished after the event as the true costs and actual benefits become self-evident. One example of how mad and distorted the figures get were the claims that “32 billion viewers” watched the cup in South Africa. There are only seven billion people on the planet. South Africa has an economy about a sixth that of Brazil’s, which in turn has an economy about two-thirds that of Germany (FIFA host in 2006), and yet the nation of South Africa ponied up at least US$3 billion to host the event. FIFA walked away with a staggering profit of $3.5 billion tax free, 14 times the profit when the event was held in wealthy Germany when FIFA made (or was constrained by those sensible Germans to make) only a mere $254 million profit. Berliners have been in high spirits as their team beat Portugal, the United States, Algeria and France, and went on to thrash the host nation, securing their place in the finals on Sunday, their fourth since 1930. But ask the locals about the FIFA legacy and the reaction you are likely to get is that it was a great party, nothing else. No German seriously believed it would create jobs, boost GDP, bolster the country’s image or be a tax windfall. Germans can afford fun. They are rich. Already in 2007, my German friends in government positions were warning me that holding the cup in South Africa would only create greater not less inequality in an already economically riven nation. To give one example, it has been shown that the number of years a general worker would have to work to earn what the CEO of the construction companies building the stadiums earned (on average per annum) increased from 166 in 2004 to 285 years in 2009. [caption id="attachment_10347" align="alignright" width="300"] 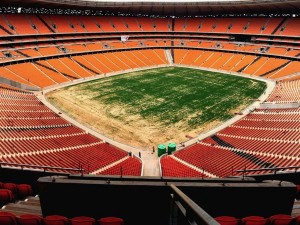 Before the tournament: The flagship Soccer City in Soweto, aka First National Bank Stadium. South Africa’s monopoly capitalist construction firms and their Black Economic Empowerment allies inflated prices, rigged tenders, and registered a 100% increase in their profits from 2004 to 2009[/caption] But FIFA has an almost unbeatable formula. It has the knack of matching mass support with prestige projects. Politicians love what the World Cup does for their image in the eyes of the world. Global corporations love getting not only a tax holiday, but also a massive subsidy from local taxpayers to make even greater profits. Both love the billions up for grabs nations spend to host the event. And the people love the tournament; sport mania, nationalist pride and economic desperation make for gullible populist support. In South Africa, most bizarrely the Communist Party came out rabidly in support of the event. This as South Africa’s monopoly capitalist construction firms and their suspect class of Black Economic Empowerment allies inflated prices, rigged tenders, and registered a 100% increase in their profits from 2004 to 2009 then massively cut (not added) jobs; as the state gave astonishing tax concessions to FIFA and its global corporate partners, exempt them from foreign exchange controls, suspended labour legislation, and took extreme measures to entrench the private property rights of multinationals that aren’t even integral to the South African economy. No one has yet scientifically shown any tangible benefits from the 2010 World Cup. South Africa is left with a clutch of empty stadiums, white elephants costing ratepayers millions per annum. Undoubtedly, the country has benefitted from the $1.7 billion the government spent on improving transport infrastructure, though it’s the wealthy that have most enjoyed the new roads, upgraded airports, enhanced neighbourhoods, and the Gautrain. All this is infrastructure that could have and should have been done by government without a World Cup. It is a sad reflection on government that political will can only be mustered for the sake of the eyes of foreign capitals and not through the wishes of its own people. The South African government found billions to build high quality, giant state of the art stadiums and completed them well within schedule. Yet it can’t build simple quality houses for the people evicted from land and protesting in the streets in the shadow of the stadiums. Such is the nature of the prestige project and its ability to circumvent democracy. And what of the sportsmen and women of South Africa four years later? FIFA has to date transferred $42 million to the World Cup Legacy Trust, a fund that supports “grassroots” soccer projects. That is 1.1% of its profit (which didn’t generate tax revenue for the host country). The legacy for young black South African soccer players has been pitiful to date. The board only decided in January 2013 to disburse the first funds and approved applications totalling $5 million. It is notable too that the national team of the former host nation failed even to qualify for the 2014 event. Perhaps the most widely touted claim for the legacy of the cup is that it changed the image of South Africa as an “investment destination”. But no sensible businessman will blindly direct investment to South Africa just because they saw a soccer match. They will as always do their homework on the fundamentals and the challenges pertinent to their business, and those challenges haven’t changed for the better thanks to FIFA. That it changed the minds of Afro-pessimist is equally absurd. If it did, it only took them one week more of news from Nairobi or Bangui or Marikana or Nkandla to bring back their prejudices. The second greatest claim – also hard, if not impossible, to quantify – is it boosted tourism. But given the costs involved, it seems even in the best-case scenario a feeble return. Imagine rather if the billions spent on stadiums was put into tourist infrastructure that could be accessed, used and enjoyed daily by visitors to the country. I have little doubt word of mouth was excellent from the fans who came to South Africa, as it generally is among visitors who discover the country. But did seeing the World Cup on television change the image of South Africa? Of this, I am less sure. More than once here in Berlin I have been asked about whether visiting South Africa is safe and are we tourist friendly. The first time, I was aghast. Did you not see our marvellous World Cup? Didn’t you see what we achieved? [caption id="attachment_10348" align="alignleft" width="300"] 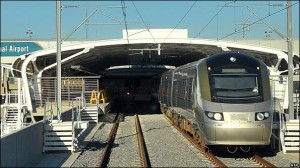 The country has benefitted from the $1.7 billion the government spent on improving transport infrastructure, though it’s the wealthy that have most enjoyed the new roads, upgraded airports, enhanced neighbourhoods, and the Gautrain, South Africa’s first high-speed train (Pictured). Photo: AFP[/caption] I have subsequently realised that the act of watching football takes place in a bubble. No cognitive connection is made between the country as a place to go to on holiday and what is seen enacted by international sports teams on football pitches that look exactly the same everywhere in the world. It is like trying to sell a country by showing people pictures of McDonalds – look we have these too. It is hard to write a column like this at this particular time, knocking the FIFA World Cup when everyone else is in raptures, but the unpleasant facts are there. South Africa certainly did itself proud in delivering the event so superbly, but to make any economic argument in favour of hosting the World Cup is at best delusional. FIFA expects to make a profit of $4 billion in Brazil. *Source thisisafrica]]>