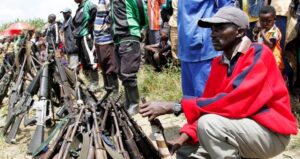 The surrender of 105 FDLR rebels in Kateku was considered insignificant by the UN. Photo©Kenny Katombe/Reuters[/caption] Despite the peace deals signed in Addis Ababa and Nairobi, problems related to Burundi, Rwanda and Uganda remain unresolved. A series of largely unconnected regional political challenges has created stumbling blocks for the government in Kinshasa and the region’s diplomats. Conflict with Uganda revolves around the presence of Alliance of Democratic Forces-National Army for the Liberation of Uganda (ADF-NALU) rebels in eastern Democratic Republic of Congo (DRC) and amnesty discussions for the Mouvement du 23 Mars (M23) rebels in Uganda. The government’s relations with Rwanda depend on the status of the eastern-Congo-based Forces Démocratiques de Libération du Rwanda (FDLR) and the issue of refugee return. Meanwhile, the United Nations (UN) has reported that the ruling party in Burundi has sent its youth militia to Congo’s Sud-Kivu Province for training, raising tensions ahead of Burundi’s elections in 2015. Five months have passed since the Congolese government and the defeated M23 rebel group signed the Nairobi accord to put an official end to the eastern DRC’s most recent wave of armed insurrection. As part of the international peace efforts in the Addis Ababa Peace, Security and Cooperation Framework, this accord tries to resolve other issues with cross-border relevance, such as refugee return. Amnesty headaches The fate of M23 is an essential element for any normalisation of relations between the DRC and Rwanda. However, the Nairobi deal did not address all critical regional issues. The government’s first wave of amnesties included a couple of M23 political cadres. But the majority of its forces, including political and military heads Bertrand Bisimwa and Sultani Makenga, continue to live in exile in Uganda, with others in Rwanda. There are no indications about when and how their futures will be made clear. Moreover, there has been little meaningful progress in the repatriation of Congolese refugees, contrary to what is stipulated in the Nairobi deal. Against the backdrop of security challenges, the Congolese government and its partners in the UN peacekeeping mission’s Force Intervention Brigade have focused their recent activities on combating other armed groups, including ADF-NALU, an Islamist rebel group operating from strongholds around the town of Beni. While these operations appear to have been fairly successful so far, there has not been serious action against the FDLR, who are remnants of the Interahamwe groups that carried out the Rwandan genocide 20 years ago. The FDLR leadership made a diplomatic gamble by announcing the voluntary demobilisation of its ‘Nord-Kivu brigade’ in late May. However, the leadership followed up halfheartedly, leading to the surrender of 105 rank-and-file combatants with mostly old weapons to the UN in Kateku. A declaration from the UN and regional envoys described the move as insignificant. Kigali drags its feet While Kigali rejects negotiations with the FDLR, Congolese stakeholders seem divided about whether to push Kigali or to use military means. In this light, the joint Congolese and UN operations against the Alliance des Patriotes pour un Congo Libre et Souverain, a militia based in Masisi, raise important questions about the government’s priorities in eradicating armed groups, as the current UN Security Council resolution demands. The FDLR has massive historical, diplomatic and political relevance to regional stability and is an impediment to the new national disarmament process. UN reports say that Burundi’s ruling Conseil National pour la Défense de la Démocratie-Forces de Défense de la Démocratie has sent its Imbonerakure youth militia for military training in the Ruzizi plains in Sud-Kivu. Though the claims lack independent verification, there is a danger that parts of Sud-Kivu could become embroiled in politico-military struggles around the Burundian presidential elections in 2015. The role of President Pierre Nkurunziza is key to regional security due to the historical alliance between Congolese and Burundian armed movements. *theafricareport.com]]>