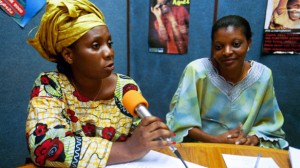 Women from Guinea-Conakry speaking at a local radio station about the problems they face as refugees in the Ivory Coast. Photo by: Ami Vitale / World Bank / CC BY-NC-ND[/caption]

Is the news media killing American investment in Africa?

Perhaps — but the tide is turning. Africans have long complained about the media’s negative bias towards their continent, and a quick Google search of top stories out of Africa lately confirms the thesis that “if it bleeds, it leads.” Ebola, Boko Haram and ethnic violence in South Sudan and Central African Republic dominate current international coverage of the continent.

Bad press may well scare away investors, but booming economies in countries like Nigeria, Ethiopia and Ghana are changing the paradigm and attracting foreign investors. Africa now has eight of the world’s 10 fastest-growing economies.

“The opportunities in Africa are amazing,” Dr. Mima Nedelcovych, president of the Initiative for Global Development said at a recent Voice of America newsmaker event. Nedelcovych pointed out that Americans stand to lose potential economic opportunities by failing to invest in Africa.

To address some of the misconception about doing business in Africa, Washington, D.C.-based IGD has launched a series of videos entitled “Changing Perceptions” on investment in Africa.

A sea of change in African journalism

Having grown up in Africa and worked as a journalist and project manager in the continent, it’s difficult to convey just how revolutionary changes in African communications truly are.

The level of access to information is astounding in light of the near impossibility of communication in Africa just three or four decades in the past. This explosion in information access means Africans are taking coverage of the continent’s affairs into their own hands. Increasingly, they are are interacting with people across the continent and abroad, exchanging information and ideas via radio, television, and social media and partnering on co-productions. AllAfrica.com is a prime example of a news source developed by Africans, for Africans.

In addition, the fact practically all of the continent’s major newspapers are online allows for connections with the diaspora population. Now, a Tanzanian in Washington, D.C. or a Ugandan in Minneapolis can read their local African newspaper even if they are far away from home.

VOA has been eager to support this information revolution: In the past two years, the global broadcast institution’s parent U.S. government agency, the Broadcasting Board of Governors, has signed agreements to put FM radio stations in Bamako, Mali; Bangui, Central African Republic; Juba, South Sudan; and N’Djamena, Chad.

Perhaps most excitingly, we are witnessing increased interest among women and young people in covering Africa’s news. Expanded women and youth participation are providing African journalism with a breath of fresh air.

Investing in a connected continent

But on the investment front, the United States still has a long way to go.

U.S. investments in Africa have fallen behind in relation to China and other countries, according to a recent article in the Financial Times. And while U.S.-Africa trade stood at about $110 billion in 2013, China was Africa’s largest trading partner with about $200 billion.

Given that backdrop, U.S. Secretary of State John Kerry toured several African countries in May, urging Americans to get in the game. “We want more American companies to be here, to invest here — both to unleash the power of the private sector in Africa and to create more jobs in America,” he said.

One of the hottest market sectors in Africa is communications. According to the World Bank, sub-Saharan Africa is now home to approximately 650 million mobile phone subscribers, a number that surpasses those in the United States and the European Union.

“More people have access to Internet in Africa than they do to clean water, or even sanitation,” says Samia Melhem, the World Bank’s regional coordinator for information and communications technologies for Africa.

And technology hubs are springing up across the continent: “Nairobi, Kenya; Accra, Ghana; Lagos, Nigeria; and even Kigali, Rwanda are quickly becoming centers of innovation and entrepreneurship, catching the world’s attention,” the Huffington Post recently wrote.

Still, challenges remain for doing business. Corruption, repression, and the lack of basic press freedoms can all scare investors away. But as more people travel to Africa, work with Africans and better understand the continent, the news stories are sure to change.

To learn more about the “Changing Perceptions through Digital Storytelling” project, click here.

*Source devex.com .Joan Mower is the director of development and international media training at the Broadcasting Board of Governors which oversees Voice of America, RFE/RL, RFA and the Middle East Broadcasting Network. She specializes in media projects in Africa, Asia and Latin America and oversees special broadcasting in Zimbabwe, South Sudan, Ivory Coast, Angola, Mozambique, Senegal, DRC, Nigeria, Tanzania and Burundi