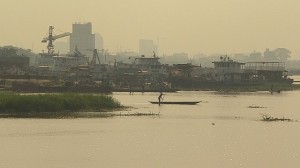 Kinshasa, the capital of the Democratic Republic of Congo, has found itself in the middle of a construction boom over the past decade. The economy has also been given a jolt by the entrepreneurial spirit of Congolese returning home from abroad.[/caption] Kinshasa hasn’t had an easy time of it. A decade ago, the capital of the Democratic Republic of Congo was a broken city, ravaged by years of war and infighting. Of late, however, Kinshasa has witnessed a resurgence, with many expatriated Congolese returning to build a new city. “When I came back, people thought I was crazy. “[They would ask], ‘why would you go into a country where there is war? Where nothing is working? Why not stay in the States and make your life?'” says Joss Ilunga Dijimba, who returned to Kinshasa in 1996 after studying in America. Today, Dijimba runs his own eponymous business, manufacturing plastic bottles for the pharmaceutical industry. “In the USA, everything has been done — everything. In Congo, there is still a way to make things right. I am a Congolese. If I’m not going to make it, who’s going to?” In agreement is Olivier Ndombasi, who always planned on building his fortune in his homeland. Like his elder brothers, he studied abroad in the hope of bringing back knowledge that could improve the family business: groceries. His father’s small store has now turned into a supermarket franchise called Peloustore, with four locations and more on the way. “It’s very exciting to be able to do things in a new environment, and do things you didn’t think you’d be able to do,” says Ndombasi. “The challenge is great, but it’s very exciting.” Many agree that there are obstacles, but returnees often cite the exhilaration of starting with a clean slate. “Come to Kinshasa, you unlearn what you thought you knew. You take your MBA book, your business plan, put it in your pocket and start from scratch,” says Alain Yav, who 12 years ago founded Pygma Group, a holding company that has interests in communication and construction. Pygma also produces one of the country’s most popular television shows: Beauty Queen. Though the journey has been long, and there are still large portions of the country’s population living below the poverty line (70.5% in 2011, according African Economic Outlook), Yav says Kinshasa is starting to reap economic benefits. “When you are working really hard, at some time, you stop believing. But I think we are lucky, because we are seeing it’s progressing. Not just us, not just our company, not just our industry, but we are seeing things move forward in every direction,” he says. [caption id="attachment_10437" align="alignright" width="300"] 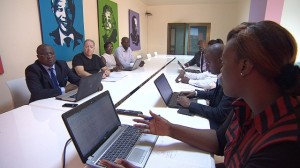