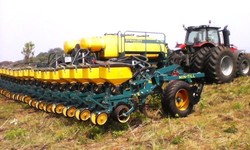 The DRC government spent $83 million setting up the 75,000 ha Bukanga Lonzo park, where a South African consortium called Africom has been handed the management contract.[/caption] Democratic Republic of Congo has launched its first agricultural business park, the initial step in a plan to use its vast tracts of arable land to produce food, create jobs and wean the economy off its dependence on mining. Congo has 80 million hectares of arable land and some 70 percent of the population works in farming but most are involved in subsistence agriculture and the country spent $1.5 billion on food imports last year. – The program hinges on Congo overcoming its reputation for being one of the trickiest business environments and reversing the current trend for agriculture’s contribution to the economy declining as the mining sector expands. “This initiative has potential to create durable growth and limit the vulnerability of an economy that depends on natural resources and fluctuations of international markets,” Jean Chrysostome Vahamwiti, minister for agriculture and rural development, said on Tuesday at the launch of the 75,000 hectare Bukanga Lonzo park, 240 km (150 miles) east of Kinshasa. The government hopes foreign and local farmers there will produce a range of vegetables – including corn, beans and cassava – as well as meat and fish to be mainly sold in Kinshasa, which is home to some 10 million people. The government has spent $83 million setting up Bukanga Lonzo, where South African firm Mozfood & Energy carried out feasibility studies and a South African consortium called Africom has been handed the management contract. President Joseph Kabila has pledged to radically reform agriculture in his country, which is rich in minerals and fertile land but has endured decades of misrule and slipped into a series of conflicts since the 1990s. Kabila attended the launch, driving one of the tractors due to be used to work the land, but he did not make any comment. ROLL OUT Congo’s per capita agricultural production has been in decline since the 1960s and 70 percent of its population lives on under a dollar a day, according John Ulimwengu, senior adviser for agriculture and rural development in the prime minister’s office. “The objective here is to liberate ourselves from this dependence on imports,” he said, adding that some investors had expressed interest but no deals have been signed yet. Congo’s economy is due to grow by 8.7 percent this year, extending a post-war revival as investors tap into the potential of the Central African nation, but the expansion is largely fueled by the eastern-focused mining sector. Bukanga Lonzo, in the west, is meant to create 5,000 direct and 12-15,000 indirect jobs. Similar sites are due to be rolled out in each of the country’s 11 provinces. However, small farmers said the government should focus on helping those already in place rather than handing large swathes of land to foreign investors. “The problem is that the huge percentage of people who work the land must be supported,” said Victor Nzuzi, a farmer and activist. “We just need to give them the means. This initiative only serves the investors.” Ulimwengu said small scale farmers had a role to play, for example in selling produce to the business park, but Congo’s priority had to be to modernise the sector as a whole. *Source   Reuters/ farmlandgrab]]>