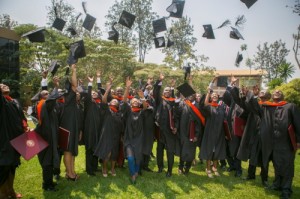 Carnegie Mellon University in Rwanda Graduates Its First Class[/caption] Carnegie Mellon University (CMU) in Rwanda (http://www.cmu.edu)  is proud to announce that its first class in Africa graduated on 24 July, 2014. The ceremony, which took place at the Serena Hotel in Kigali, Rwanda, awarded 22 students with master’s degrees in information technology (IT). The graduation underscores Carnegie Mellon University and the Government of Rwanda’s commitment to educating engineers and entrepreneurs who are striving to make an economic impact in East Africa. Many of the students have ambitions to be the next technical innovators and business leaders responsible for ushering the region’s economic and social growth into the future. In 2007, the International Telecommunication Union, the United Nations agency for information and communication technologies, recommended establishing Centres of Excellence throughout Africa to cultivate the science and technological skills required for developing an IT workforce and expertise in Africa. Motivated to elevate global intellectual and economic vitality, Carnegie Mellon University became the first U.S. university to offer a master’s degree programme taught by full-time faculty resident in Africa. “Being present in East Africa is the only way to understand the region’s technology needs,” says Bruce Krogh, the inaugural director of CMU in East Africa. “Creating a long-term education programme is critical, because it gives students time to analyze problems and develop solutions in the context in which they occur.” Carnegie Mellon students in Rwanda receive a world-class education enriched by the institution’s history and tradition of excellence that began in the United States in 1900. Rigorous coursework, practicums and internships provide students with the critical skills valued by industry throughout East Africa. [caption id="attachment_10587" align="alignright" width="300"] 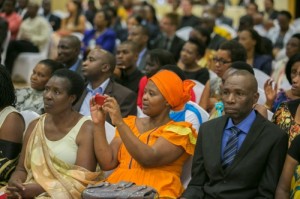 Carnegie Mellon University (CMU)[/caption] To ensure that Carnegie Mellon University’s research and curriculum in Rwanda remain relevant to Africa, the faculty and students engage with local companies and multinational corporations on a continual basis. Companies that have recruited Carnegie Mellon University students for internships in East Africa include General Electric, IBM, Marriott, Microsoft, VISA and Voxiva. “It is important that students stay in East Africa instead of studying in the States or elsewhere. If Africa’s best students leave to study abroad for two years, that becomes problematic. At CMU, students remain plugged into the region’s rapidly evolving technical and business networks,” says Krogh.   https://www.youtube.com/watch?feature=player_detailpage&v=l2Xwt_oKyBo#t=65     “Our graduating class is filled with remarkable young men and women who are ready to enter industry and become entrepreneurs. We are excited about their potential to make significant contributions to IT in East Africa and the world,” says James H. Garrett Jr., dean of Carnegie Mellon College of Engineering. In Africa, Carnegie Mellon University offers two graduate degree programmes: its founding programme, the M.S. in Information Technology, and the M.S. in Electrical and Computer Engineering launching in August, 2014. The programme currently has 43 students and 8 faculty members. Research areas include energy systems and IT for healthcare and business. *Shared by APO]]>