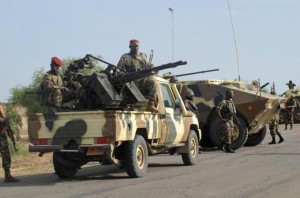 Cameroon has deployed more than 1,000 troops along its border to help combat Boko Haram [AFP][/caption]The wife of Cameroon’s vice prime minister, Amadou Ali, has been kidnapped and at least three other people have been killed in an attack by Boko Haram fighters on Ali’s home in the northern town of Kolofata, officials have said. A local religious leader and mayor, Seini Boukar Lamine, was also kidnapped in a separate attack on his home. “I can confirm that the home of Vice Prime Minister Amadou Ali in Kolofata came under a savage attack from Boko Haram militants,” Cameroon’s information minister Issa Tchiroma told Reuters news agency on Sunday. “They unfortunately took away his wife. They also attacked the lamido’s (religious leader’s) residence and he was also kidnapped,” he said, adding that at least three people were killed in the attack. Boko Haram fighters clashed with the Cameroonian army in cross-border attacks twice since Friday, killing four soldiers. Cameroon has deployed more than 1,000 soldiers along its border to help combat the Nigerian armed group. 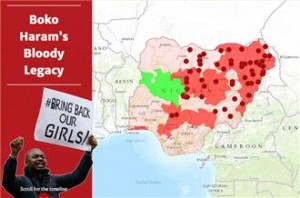 In May, Boko Haram kidnapped 10 Chinese workers from northern Cameroon. A massive assault last week by Boko Haram in which the group took control of northeast Nigerian town of Damboa displaced more than 15,000 people. Thousands of people have died since Boko Haram launched an uprising in 2009, and several hundred have been killed in the past two months as the group steps up its campaign against the government. The group gained international notoriety after kidnapping more than 270 schoolgirls in northern Nigeria in April, but has been active in the country for more than 12 years. *Source Al Jazeera]]>