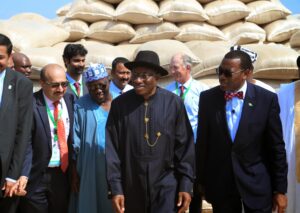 From left Managing Director Olam Rice Nigeria Mr Srivatsan Nasarawa State Governor Tanko Al-Makura President Goodluck Jonathan and Agric Minister Dr Akinwumi Adesina at the commissioning of Olam Rice Farm .Nigeria at Rukubi Nasarawa State on Monday 14th July 2014.[/caption] In line with the agenda to improve the crop yield and ensure food security across the country, Olam farms has commissioned Africa’s largest rice facility in Nasarawa State. The farm which covers a total land mass of 6,000 hectares was officially opened for production in Rukubi village, Doma local government area, at the start of the week. Speaking at the event, the President Goodluck Jonathan stated that with better policy articulation and enhanced technology, the new drive for food production would aid the country exceed its mandate to hit 20 million metric tons of food by 2015. The President posited, “When I launched the agricultural transformation agenda in 2011, our goal was to add an extra 20 million metric tons of food to our domestic food supplies by 2015. I am not surprised that we are also producing the largest farm, the Olam farm, in Africa. Over the past three years, our farmers have produced over 17 million metric tons of food. Steadily on this path, we expect to surpass our 2015 target of 20 million metric tons of food by the end of this year. He further said that, “We cannot justify the huge amount of rice we import each year when we have the potential to produce rice locally. If we like to eat rice, then we have to produce more. That is why we have placed total self-sufficiency in rice production as a priority for our country.” Over the years, Olam has expanded from exporting cotton, sesame, cocoa and cashew to investing in staple foods like rice. At present, the farm employs over eight thousand five hundred workers and has invested N169 billion in the project. Also at the commissioning was Governor Tanko Al-Makura of Nassarawa State who expressed his excitement at the opening of the farms which has a mill capacity of 105,000 metric tons rice. [caption id="attachment_10486" align="alignright" width="300"] 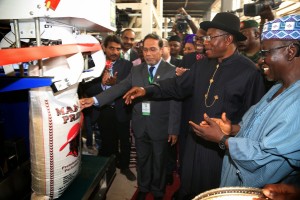 President Goodluck Jonathan presses button to commission the Bagging Section of Olam Rice Farm Nigeria in Rukubi Nasarawa State on Monday 14th July, 2014[/caption] “To say we are happy today is an understatement. This is a demonstration of the vision of the federal government in the transformation agenda in the agricultural sector.  The initiative will certainly expand its scope of multilateral cooperation between Nigeria and Singapore. According to Al-Makura, his administration has fast-tracked, facilitated and eased the process of land acquisition for Olam farms and other investors so as to encourage the active participation of foreign investors in the development of the state in spite of the looming security challenges. Mukul Mathur, Country Head of Olam Farms said that, “What we have achieved so far, is in line with the agricultural transformation agenda and in the last three years, we have invested more than N100 billion, building broad-based participation across the value chains.” The site which was visited a few months ago by the Minister of Agriculture has been recommended as a Staple Crops Processing Zone. * Source businessday]]>