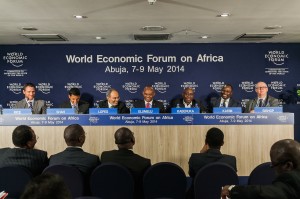 May was an important month for Africapitalism, the economic philosophy that we at Heirs Holdings advocate and apply to our businesses. More than a concept, Africapitalism is a way of doing business – the private sector investing for the long term in key sectors that will create economy prosperity and social wealth. This is a philosophy that has real potential to transform the African continent, and it is a message we have championed, both in Nigeria and abroad, aiming to inspire and encourage burgeoning Africapitalists everywhere. Thus, the Africapitalism Institute was launched at the 2014 World Economic Forum on Africa, which was hosted to great acclaim at the Transcorp Hilton, Abuja, one of our investments in the hospitality sector. There, a powerful panel of supporters comprising Dr. Raj Shah, USAID Administrator; Donald Kaberuka, President of the African Development Bank; Dr. Carlos Lopes, Executive Secretary of the United Nations Economic Commission for Africa; Kola Karim, CEO of Shoreline Energy Group; and Matthew Bishop, US Business Editor and New York Bureau Chief for The Economist, who will also serve as an inaugural board member for the Institute, testified to the timeliness of our initiative. One critical objective of Africapitalism is the establishment of credible thought leadership in Africa, which will catalyse growth and change lives. Through the Institute, we are also contributing to the global debate on our world’s future – influencing opinions and decisions about how the private sector can work effectively and sustainably.  The month of May saw us doing just that – taking our message to global audiences, and ensuring African voices enrich this international debate. In New York, I joined over 300 global leaders and practitioners at the Shared Value Leadership Summit, an annual conference conceived by the notable leading Professor, Michael Porter, of The Institute for Strategy and Competitiveness, based at the Harvard Business School and Founding Patron of The Tony Elumelu Foundation. The annual event is the leading forum for shared value practitioners. This year, during an incisive discussion with representatives from the private and public sectors, we debated the role the investment community can play in advancing the shared value business concept, which advocates the creation of meaningful economic and social value that exceed the costs for the business and society. It is a notion, which, for Heirs Holdings, is synonymous with Africapitalism. 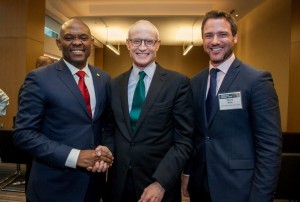 Most recently, we have taken the message to London, where we lent our support to the Inclusive Capitalism conference, which was hosted by the Tony Elumelu Foundation advisory board member, Lady Lynn Forester de Rothschild, Chief Executive of E. L. Rothschild and champion of the Inclusive Capitalism Initiative, as well as the Lord Mayor of the City of London.  The Inclusive Capitalism Initiative was established in May 2012 in response to the global financial crisis, which highlighted the serious dislocations caused by negative developments in capitalism over the last 30 years. The fraying of the public’s trust in corporate institutions has increased high unemployment around the world and short term profit taking, triggering a need to rethink the approach to capitalism in the 21st century. The Inclusive Capitalism Conference took place in the center of London’s financial district. I, along with global leaders and representatives of institutional investors, corporations, sovereign wealth funds and financial institutions, including former US President, Bill Clinton, Presidents Olusegun Obasanjo, John Kufour of Ghana and the Managing Director of the IMF, Christine Lagarde, were greeted by HRH Prince Charles, who gave the keynote address.  Then, over several hours, we proceeded to share insights and proposals for a new capitalism, that will increase social value and, in consequence, prosperity that is both sustainable and inclusive. This urgency and global process is of the utmost importance to me as an African investor and the leader of a dynamic organisation that is expressly committed to doing well and doing good. I had a great opportunity to share with these influential men and women the premise of Africapitalism, as well as the role that the Africapitalism Institute aims to achieve on our continent. Through practically-applicable, academic research and multiple stakeholder engagement, the Institute will not only advocate public policies and business practices that can unlock opportunities for all Africans, but will also play a significant role in identifying strategies that can assist in stemming the tide of sectarian violence that currently threatens countries like Kenya and Nigeria. To my mind, this is an offshoot of Africapitalism that everyone, the world over, stands to benefit from, regardless of where we live or work.  *For more information on the Africapitalism Institute, visit: www.africapitalisminstitute.org and follow on Twitter @AfricapInst]]>