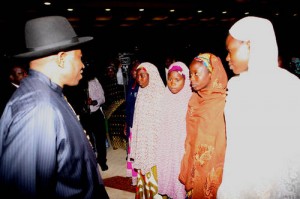 President Goodluck Jonathan meeting with some of the Chiboks girls who escaped from Boko haram in Abuja today
State House Photo[/caption] President Goodluck Jonathan today in Abuja told members of the Chibok community, hundreds of whose daughters were abducted by Boko Haram militants exactly 100 days ago, that his administration is doing “everything humanly possible” to rescue them. Mr. Jonathan spoke during a belated meeting in the presidential villa with parents of the abducted girls, some of the girls who escaped from their abductors, and leaders of the community. It was his first meeting with the parents, and he appealed for their patience, understanding and cooperation, presidential spokesman Reuben Abati said in a statement. Mr. Jonathan has never been to Chibok, and his government responded to the abductions by spending weeks questioning that they ever happened in the first place.  Critics say that mistake gave Boko Haram the space and time to split up the girls and make them hard to find. “Anyone who gives you the impression that we are aloof and that we are not doing what we are supposed to do to get the girls out is not being truthful,” he said, trying to parry widespread criticism of his government. Mr. Jonathan further told his visitors: “Our commitment is not just to get the girls out, it is also to rout Boko Haram completely from Nigeria. But we are very, very mindful of the safety of the girls. We want to return them all alive to their parents. If they are killed in any rescue effort, then we have achieved nothing.” He noted that that although he was yet to visit Chibok since the abductions, his heart was constantly with its traumatized parents and people, and his desire was to visit them when their daughters have been freed and they can receive him with smiling faces of joy, rather than with tears of anguish. Apparently sensing the weight of heavy expectations, Mr. Jonathan told the parents that the occasion was not the time for “talking much,” but for action. “We will get to the time that we will tell stories. We will get to the time that we will celebrate and I assure you that, by God’s grace, that time will come soon.” According to Mr. Abati, the event, which was held behind closed doors, was also attended by Governor Kashim Shettima of Borno State, Governor Isa Yuguda of Bauchi State and the Senate President, Senator David Mark. National Security Chiefs, Ministers and other senior government officials were also present at the meeting. “Other speakers at the meeting included a district head, Mr. Zannamadu Usman, a member of the Borno State House of Assembly, Hon. Aminu Foni Chibok, parents of the abducted girls and three of the girls who escaped from their captors, Godia Simon, Dorcas Musa and Joy Bishara,” and that the community’s address to the President was presented by Dr. Pogu Bitrus. Strangely, the State House statement presented a heavily one-sided report of the occasion.  It appeared that a clear decision was made to scrupulously suppress the statements delivered on the occasion by the visitors, but the parents appeared to have begged Mr. Jonathan to do more to protect them. [caption id="attachment_10488" align="alignright" width="300"] 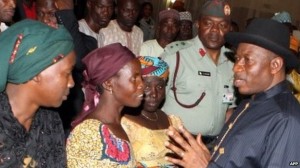 President Goodluck Jonathan has been criticised for not meeting parents earlier[/caption] “Responding to appeals from the community leaders for more help in overcoming some of the challenges imposed on Chibok and neighbouring communities by the Boko Haram insurgency, the President said that the National Emergency Management Agency (NEMA) and Federal Medical Agencies will intensify their efforts to provide them with additional relief aid and assistance,” Abati wrote. He said Mr. Jonathan also assured them that Chibok and other communities in the three North-Eastern States most affected by the Boko Haram insurgency will be the first beneficiaries of the Victims’ Support Fund, the Presidential Initiative for the North-East, the Safe Schools Initiative and other developmental programmes which the Federal Government is evolving to address the damage, losses, setbacks, economic and social dislocations occasioned by the Boko Haram insurgency.” According to the spokesman, Governor Shettima called for “more sobriety, reflection and unity of purpose” in the fight against terrorism in the country, but it was not clear to whom those words were specifically addressed, as it could not have been the victims. The governor was said to have pledged that Borno State will give President Jonathan the fullest possible support for his efforts to address the problems caused by terrorism and the Boko Haram insurgency. *Source Sahara Reporters ]]>