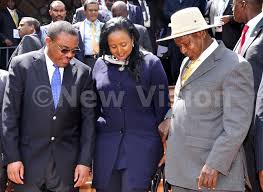 Uganda has done very well from its economic involvement in the Republic of South Sudan.  In 2012 alone,  the country earned $1.3 billion from its export to the new African nation. It is unfortunate that a civil war is now raging in the country, and this is certain to cause a huge damage to Uganda’s monochrome economy. In order to maintain its lucrative niche, Uganda should have sought to bring peace and stability by acting as an honest and fair broker. Instead, it joined the fray on the side of President Salva Kiir to the utter dismay of Vice President Riek Machar and the Intergovernmental Authority on Development (IGAD).

Uganda is a member of IGAD which is in favour of a genuine dialogue and not a partisan military intervention that could inflame the volatile situation further.  Surely, Uganda’s membership of IGAD has to be reviewed urgently in light of her disregard for the organisations principles of neutrality and non-interference.

Ethiopia has a strong economic and political interest in South Sudan and these have been seriously jeopardised by President Museveni’s intrusion. There are large numbers of Ethiopian investors in the capital Juba and without peace and stability they will have no choice but to abandon the country leaving their businesses behind. It is also possible that there may be a conflict spill over to Gambella that is largely inhabited by the Neur ethnic group which are closely related to Riek Machar’s followers.  Yoweri Museveni is certainly doing his utmost to scupper Ethiopia’s economic success and its ability to pull large numbers of multinational investors that he is desperately trying to lure to Uganda. The President has even gone as far as allying himself with the arch enemies of Ethiopia in order to achieve his desired purpose.

In 2012, Museveni visited the Eritrean dictator whose only preoccupation is to create chaos in Ethiopia by financing and arming leftovers of the previous regime that was crashed by a popular revolt. The pariah leader not only props-up the Diaspora extremists, but the Islamic Courts/Al-Shabab of Somalia that declared jihad on Ethiopia as well. His support for the Islamic militants has been conclusively proved by the UN’s Monitoring Group on Somalia, and it was as a result of this that the Security council imposed crippling sanctions on Eritrea in 2009.

With glaring evidence, Esayass denied any involvement in Somalia but nobody believed him except Yoweri Museveni. During his visit to Eritrea, the Ugandan strong man said ‘’ Al-Shabab is not supported by Eritrea that is what the president told you and that is what he told me. I accept it because he told me, he is an honourable comrade, he is not somebody who has just walked out of the slums.’’ Al Shabab armed with Eritrean weapons has so far killed over 3000 Ugandan troops in Somalia. The terrorist group was also responsible for the twin blasts in Kampala in 2010 that caused 70 serious injuries and 74 fatalities. Museveni is willing to believe the tyrant who is causing the death of Ugandan people as he wants to rely on him to check-mate Ethiopia’s upward and onward trajectory. Numerous attempts to sabotage the stupendous economic growth have been successfully foiled and the Ugandan leader must be aware of the fact that Ethiopia is capable of dealing with the tin-pot dictator who is ruling a failed ‘region’ with an iron fist.

The unwarranted presence of Ugandan troops in South Sudan has caused the conflict to turn from a simple power squabble into an ethnic based strife. So far, 10,000 people have died and 1.2 million have been displaced from their homes.  Over 315,000 inhabitants have fled their country, and out of these, 110,000 have sought refuge in Ethiopia. Massive humanitarian crisis is unfolding, and Egypt is taking advantage of this unfortunate disaster to facilitate and hasten the down fall Ethiopia. Recently three Egyptian spies were caught in the Gambella region near the border with South Sudan. Two were apprehended while attempting to board a bus for Assosa in Benisangual-Gumuz region where Ethiopia is constructing the mega dam. The third accessory was captured by the people while taking pictures of the new dam on Baro River. Only last month another Egyptian spy who pretended to be a journalist was caught in the metropolis and deported to his country of origin.

The Arab nation has been relentlessly working to subvert Ethiopia in order to halt the progress of the Renaissance Dam. It appears that it has opted for destabilisation rather than bombings or initiating an unwinnable and costly all out war. Whatever options it chooses to implement, they are destine to fail because the dam is financed and owned by the Ethiopian people and will be resolutely defended come rain or shine. No force can prevent the completion of the hugely significant Renaissance Dam and the sooner Egypt comprehends this simple reality the better. Attack of GERD via Sudan is no longer a viable option as the country has chosen to support Ethiopia’s efforts to complete the grand project. Egypt is displeased with Sudan’s correct and wise position and may conspire to initiate a coup d’état to remove the government of Omar al-Bashir. It is in Ethiopia’s interest to do all it possibly can to ensure al-Bashir’s longevity.

The pseudo African nation has deliberately shifted the focus of attention to the construction of the Grand Ethiopian Renaissance Dam (GERD) which is a foregone conclusion as far as Ethiopia is concerned. Unfortunately, the Ethiopian government appears to be spending a great deal of time reacting to Egypt’s agenda and paying little or no attention to the bigger issue of ratification of the Entebbe Upper Riparian countries agreement that was signed in 2009/2010. Ethiopia has ratified the accord that is intended to replace the unjust Nile Waters Agreement of 1929/1959. It must now work hard to ensure the other upper stream countries do the same as soon as possible. Tanzania has come under the influence of Egypt and is calling for the Entebbe agreement to be amended. This wouldn’t have happened if more thought and effort were afforded to the sanctioning of the treaty by the parliaments of the remaining signatories.

Ethiopia’s timid approach to the life or death issue of the Nile is being exploited by Egypt and the Arab state is criss-crossing the world to garner support to kill off the accord and GERD construction. An aggressive approach by the country that contributes 85% to the Nile is absolutely necessary if Egypt is to be forced to the negotiating table. A fair and equitable distribution of the ‘liquid gold’ is long overdue. The importance of harnessing the Nile River to generate energy for the ever growing industries as well as for export and irrigation purposes to feed the mushrooming population that is expected to rise to 126 million by 2025 can’t be overstated.  It is not possible at all that the economic achievements of the last twenty years can be sustained if the sta-tus quo remains as it is now. Why should the Ethiopian people struggle to survive while the Egyptians are fed three meals a day at our expense? Now let us return to the autocratic leader in Kampala.

Uganda’s current strained relationship with Ethiopia is untenable.  President Museveni must reassess his stance and be on the side of Ethiopia and work sincerely for the prosperity of both countries. No need to associate with minnows when he can depend on a successful and strong Ethiopia that has become a show case for the rest of Africa and beyond. Furthermore, the Ugandan leader must curtail his cavalier attitude and stop muddling in countries like South Sudan, Burundi, Rwanda and Democratic Republic of Congo. Museveni will definitely require support when he launches the construction of 600 MW generating Karuma hydro dam at a cost of $ 1.4b. The formidable Egyptians will soon start to turn the heat on him and it is in his own interest to toil hard to rectify his mistakes and come up with fresh foreign policy. As far as Ethiopia is concerned, any country that impinges on its economic interests and contributes to the disturbance of its stable political system is a strategic foe.