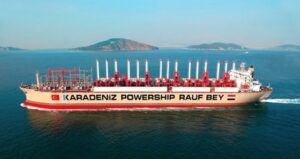 Turkish Karadeniz Holding has agreed to provide two electricity-generating vessels to power-hungry Ghana in a 10-year supply deal, the company’s chairman said. Karadeniz builds what are effectively floating power stations which plug into electricity grids after berthing. They run on fuel oil but can use natural gas as an alternative The Ghana investment is Karadeniz Holding’s first in Africa. It already produces electricity for Iraq and Lebanon, through part of its fleet of seven power ships with a combined capacity of 1,100 megawatts (MW). “There is an electricity shortage of around 100,000 MW in Africa that needs to be fulfilled urgently. This investment needs to be done,” chairman Orhan Karadeniz told reporters late on Monday. Home to some of the leading mineral and oil producers, the African continent is chronically short of electricity and is heavily reliant on diesel imports for power generation. “In addition, the countries in that region have plenty of oil and gas reserves. As these reserves come into production, and the countries get richer, the demand for electricity would rise rapidly,” Karadeniz said. The power ships, which are typically converted freighters or other vessels, are aimed at serving mainly developing countries with inadequate onshore infrastructure to cover shortfalls in their electricity supply. The agreement between Karadeniz Holding subsidiary Karpowership Ghana Company Limited (KPS GHANA) and the state-run Electricity Company of Ghana (ECG) includes the direct supply of 450 MW (megawatts) of electricity to Ghana’s grid every year. “We can extend this 10-year deal by another 10 years. We can even sell electricity to neighbouring countries through Ghana,” Karadeniz said. The first ship was scheduled to be delivered to Ghana early next year, Karadeniz said, while the second vessel was planned to be shipped within a year. Building a power ship costs around 1.5 million euros ($2 million), Karadeniz said, adding that the company was in financing talks with both domestic and foreign banks and aimed to finalise a deal in three months. Karadeniz said the company was building two more ships which would bring total capacity to over 1,500 MW within a year. *Reuters/African Report