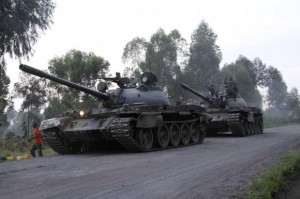 Soldiers from the Democratic Republic of Congo (DRC) arrive in tanks near the town of Kibumba at its border with Rwanda after fighting broke out in the Eastern Congo town June 11, 2014.
Credit: Reuters/Kenny Katombe[/caption] Democratic Republic of Congo and Rwanda sent extra troops to their shared border on Thursday after gunfire briefly broke out for the second day, ending months of relative calm in the volatile region. Congolese and Rwandan officials each accused the other’s armies of mounting cross-border raids on Wednesday that prompted heavy fire between the two forces. Gunfire was reported early on Thursday morning but had ceased by 0800 local time. U.N.-backed Congolese troops crushed an uprising last year in eastern Congo, a mineral-rich area plagued by years of war, which borders Rwanda. A Reuters reporter near the town of Kibumba in eastern Congo saw soldiers with heavy weapons gathering on both sides of the border throughout the morning. “There were some shots fired but very few. It has already finished,” Congo’s North Kivu governor, Julien Paluku, said. “The shots came from the Rwandan troops, our forces did not respond. They have clear instructions not to shoot unless the situation becomes very serious. We are not at war with Rwanda,” he told Reuters by telephone. Rwandan officials could not immediately be reached for comment on the clashes that first erupted near Kibumba. “I appeal for calm from both sides and urge them to take immediate steps to re-establish security in the border area,” Martin Kobler, head of the U.N. mission in Congo MONUSCO, said in a statement. France’s foreign ministry spokesman Romain Nadal said he was “concerned” by the violence and called for an immediate halt to fighting. INVESTIGATION Kinshasa blamed Rwandan forces for provoking Wednesday’s clashes by seizing and later killing a Congolese soldier. Rwanda said its army killed five Congolese troops after they crossed the border and attacked Rwandan units, although Congo insists it lost only one soldier. A Reuters cameraman on the Rwandan side of the border on Thursday saw five bodies lying in a beanfield wearing uniforms with the Congolese flag. “They have surely taken some bodies, perhaps villagers, and put (Congolese army) uniforms on them,” said Congolese government spokesman Lambert Mende. Residents said the Congolese soldiers were killed after they tried to steal cows, adding border incursions were frequent. A regional inspection team was visible on the Rwandan side of the frontier, surrounded by Rwandan troops, as part of an investigation into the cause of the flare-up. Rwandan troops have backed Congolese rebels during two wars in Congo since 1996 before Rwandan troops officially withdrew in 2003. Since then, Kinshasa and U.N. experts have repeatedly accused Kigali of backing Congolese rebels. Rwanda denies the charges and says Congo is harboring elements of the FDLR Hutu militia that took part in the 1994 genocide, killing at least 800,000 Tutsis and moderate Hutus. *Source Reuters]]>