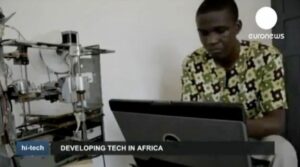 A Togolese man has found a way of using e-waste from garbage dumps and landfills to create a 3-D printer. West African entrepreneur and inventor Kodjo Afate Gnikou didn’t have access to a lot of tools and resources for building new technology but he wouldn’t let that stop him from creating cutting edge devices. According to The Prepaid Economy, Gnikou found a way to make a piece of valuable technology that normally costs thousands of dollars, from material that cost him only $100. He is now able to use the printer to make everyday items such as containers. The prototype took him several months to make. He told Euronews he had to scour a nearby scrap yard to pick up rails and belts from old scanners, as well as bits form old hard drives and desktop computers. He said:

What Gnikou, 33, hopes to do is perhaps one day create a printer that can be used to build homes, even on Mars. While others saw waste, Gnikou saw potential. Now others also see potential in him and he and was even recognized by the NASA International  Space Apps challenge last year. We salute all efforts by Africans who are creative, innovative and imaginative. Bravo! *thisisafrica]]>
0