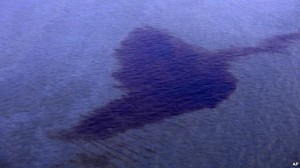 FILE – A section of an oil spill is seen off the coast of the Niger Delta in Nigeria, Dec. 26, 2011.[/caption] LONDON — Royal Dutch Shell is ready to pay up to 30 million pounds ($51 million) in compensation for two oil spills in Nigeria in 2008 after a London court rejected a larger claim, sources involved in the case said on Friday. Around 11,000 residents of the Bodo community in the Niger Delta represented by law firm Leigh Day appealed in 2011 to a London court for more than 300 million pounds in compensation for the spilling of 500,000 barrels of oil. The sources said a Shell offer from September 2013 to settle the case for 30 million pounds remained on the table. The lawyer representing the claimants on Friday rejected the sum. “Shell have consistently sought to underestimate the damage whilst paying only lip service to an apology. These spills, which are some of the largest oil spills in history,  have devastated a community of many thousands of people and ravaged the environment,” Martyn Day said in a statement. “The offer of $30m has been offered before and has been flatly refused by our clients who found it insulting and derisory, nothing has changed this view.” The London High Court on Friday rejected the claimants’ attempts to expand the scope of the compensation, ruling that the pipeline operator could not be held responsible for damage caused by oil theft. A trial is planned to start in May 2015, but Shell urged the claimants to reach a settlement beforehand. “From the outset, we’ve accepted responsibility for the two deeply regrettable operational spills in Bodo,” Mutiu Sunmonu, Managing Director of the Shell Petroleum Development Company of Nigeria Ltd (SPDC), said in a statement. “We hope the community will now direct their UK legal representatives to stop wasting even more time pursuing enormously exaggerated claims and consider sensible and fair compensation offers,” Sunmonu said. Massive oil theft, sabotage of infrastructure and leaks from aging pipelines are cutting into the profits of oil majors operating in Nigeria, as well as damaging the public finances of the African nation. *Source Reuters/VOA]]>