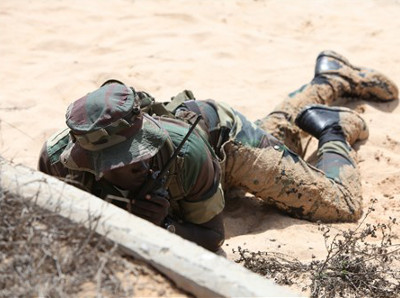 Senegalese commandos, US marines train together 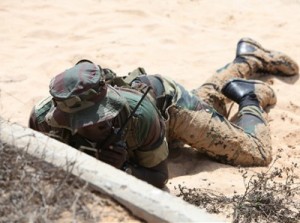 The open water was rough, but so were the commandos. The boats were rigid, but so was their desire to complete the training. The Commandos are Senegalese, from the Compagnie de Fusilier Marine Commandos who took part in a six-week long training mission with a group of U.S. Marines in April and May. The course was designed to enable the Senegalese to train their own forces in infantry and amphibious tactics and culminated in Dakar, Senegal, at the end of May. The maritime security, force assistance mission was planned to promote partnership between the United States and Senegal and to enable the host nation to better address security challenges. To accomplish this Marines stationed at Marine Corps Forces Europe and Africa’s West Africa desk planned to have the Commandos completely take over the responsibility of instructing their peers by 2014. As part of that long term plan, the Marines spent four weeks in February working with what they call a “cadre” of Senegalese instructors. It was this cadre that took over the training in April with the Marines purely in a supervisory position. The six-week long training regimen spanned three different cities across Senegal to simulate operations across a wide array of terrain. The six week-long training regimen began April 15, with a two-week period of instruction where the Marines and COFUMACO focused on maritime security force assistance, marksmanship exercises, patrolling techniques and small-boat tactics and skills. The second two-week period saw the COFUMACO completely take over the training of a new group of Commandos. The US Marines stepped back and took on an advisory role as the cadre ran their own training pipeline for the next four weeks. That four-week programme focused on the same skills the cadre had previously perfected while training with the Marines. According to Captain Travis Posey, the Marine security co-operation team’s officer-in-charge, the shift to a Senegalese-led training programme was by design and fell in line with Marine Forces Europe and Africa’s and Marine Corps Security Co-operation Group’s long term security co-operation plan for partnering with Senegal. “We knew going into this mission there had been a great emphasis put on developing the COFUMACO, but we were constantly surprised with just how quickly the cadre improved. It is a great success story anytime a partner nation can take the next step forward in combating threats more effectively,” said Posey. According to the CIA World Factbook, Senegal’s coastline is 531 km long; with a coastline roughly equal that of to the island of Puerto Rico, the importance of developing the nation’s amphibious inter-operability is obvious. The infantry Marines were able to teach their counterparts in infantry and amphibious tactics because they had several trained coxswains on their team. A coxswain is a Marine who is trained to operate a Combat Rubber Reconnaissance Craft and its associated equipment. As part of their pre-deployment training, the boat operators attended a course at their home station, Marine Corps Base Camp Lejeune, North Carolina, that qualified the Marines in how to operate the CRRC. According to Corporal Adam Newby, one of the TSC Team boat operators, the training he received at Camp Lejeune prepared him well to impart his skills on others. It was also a representation of a larger shift back to the Marine Corps’ amphibious roots. “Beach landings were a big part of the (coxswain’s) course,” he said. On transferring his stateside training to his Senegalese partners, Newby said: “Everything we trained on in Senegal was leading up to conduct a beach raid. Being a coxswain is a rare opportunity. We’re able to be employed from ships or aircraft. Being able to be employed like that provides a great tactical advantage. “The COFUMACO mentioned throughout our time together that, based on some of their experiences, they would have had a tactical advantage if they could’ve been employed by boat,” said Newby. “Being able to get in a boat and be confident, not only that but to land it and conduct a raid, that’s the greatest takeaway from the training.” The Marines, from 3rd Battalion, 8th Marine Regiment, are currently assigned to Special-Purpose Marine Air-Ground Task Force Africa 14 and are tasked with supporting Marine Forces Europe and Africa and US Africa Command by carrying out theatre security co-operation missions in various African countries in order to build partnerships and the capacity to address regional security concerns. *Source Defence Web      ]]>