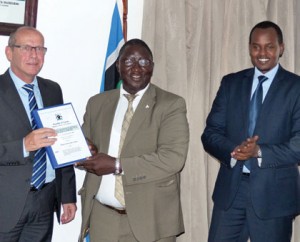 Michel Fest, the director of Gauff Ingenieure consultants (L), Uganda’s Permanent Secretary in the Ministry of Works and Transport Okello Bwangamoi (C) and Guy Kalisa, the director-general of Rwanda Transport Development Agency, after signing the contract in Kampala yesterday. Gashegu Muramira.[/caption] Rwanda and Uganda have  signed a consultancy services contract for the preliminary engineering design of the Kigali-Kampala standard gauge railway. The deal is a step forward following a decision by three East African  Community partner states–Uganda, Kenya and Rwanda–to enter a tripartite arrangement to fast-track integration projects. The proposed standard gauge railway, to be completed by March 2018, will stretch from Mombasa through Nairobi to Kampala, Kigali and Juba. Following a bidding process, a German consulting firm, Gauff Ingenieure, was awarded the contract that will see the electronic railway line linked from Bihanga in western Uganda to Kagitumba and Kigali. “This is another demonstration of the strong commitment of our leaders to carrying out joint regional integration projects aimed at easing trade in the region,” Guy Kalisa, the director-general of Rwanda Transport Development Agency, said after signing the contract in Kampala yesterday. Kalisa said Rwanda and Uganda will share the Euro6.3 million (about Rwf5.8 billion) cost of the designs of the railway. Rwanda will pay Euro1.4 million, while Uganda will cater for the rest. “We are still at the level of the designs. We will know the total cost of engineering and procurement after the consultants have given their advice on the routes and alignment from Kagitumba to Kigali,” Kalisa said. Call for diligent work The consultants will majorly work on reducing sharp corners from Kagitumba and focus on straight alignments to enable an efficient and faster system. Uganda’s State Minister for Transport John Byabagambi called on the consultants to work diligently so that their services are completed in 12 months. “The improved railway services will invariably occasion a drastic freight model shift from road to rail,” he said. Michel Fest, the director of Gauff Ingenieure, said their biggest challenge is on completing the services on time. The railway will replace the existing 100–year old metre gauge railway (Kenya-Uganda) and will enable the operation of longer, heavier and faster trains. The Nairobi-Kigali standard gauge railway is estimated to cost about $13.5 billion and the financing will be done jointly among the three countries. Experts say the railway line will have the capacity to ferry cargo at speed of up 80 kilometres per hour, which will trim down transportation costs–considered one of the leading challenges to doing business within the region. Most traders depend on trucks for ferrying their goods, which presents challenges, especially with the trade barriers such as roadblocks, axle load bridges, corruption as well as delays at borders in clearing processes. Kenya commissioned the construction of a railway network from Mombasa to Nairobi last year. *newtimes]]>