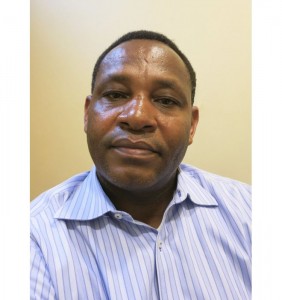 Edouard Kayihura, survivor of the genocide in Rwanda[/caption] The dreams still come to Edouard Kayihura. In them, he is running in fear from people intent on killing him. They’re the bad dreams of a man who lived a real-life nightmare: Kayihura, who lives in Westerville, is a survivor of the 1994 genocide that killed at least 800,000 people in the African nation of Rwanda. To mark the 20th anniversary of the slaughter, he has co-written a controversial book, Inside the Hotel Rwanda: The Surprising True Story . . . and Why It Matters Today (BenBella, 260 pages, $24.95). In recounting the horror, the book challenges the well-known Hollywood depiction of it in the 2004 movie Hotel Rwanda. “It’s wrong,” Kayihura said in an interview. “The (movie) . . . is wrong.” On April 6, 1994, Kayihura was working as a prosecutor in Kigali, the Rwandan capital, when the nation’s president died after his plane was shot down. The Hutus, Rwanda’s ruling ethnic group, blamed rebels from the Tutsi minority and began a wave of killings. Kayihura, a Tutsi, spent several hellish days evading death squads before a Hutu friend risked his own life to get him to the Hotel des Mille Collines, which had token protection provided by U.N. troops. Hundreds of desperate Tutsis sought refuge there. “At least I will die with other people,” Kayihura thought. In Hotel Rwanda, hotel manager Paul Rusesabagina (played by Don Cheadle) is portrayed as a hero who kept more than 1,000 people out of the clutches of the killers who roamed just outside. But Kayihura’s book charges that Rusesabagina socialized with leaders of the genocide and cruelly demanded money for food and rooms from the penniless refugees. He writes that leaders of the genocide spent time in the hotel with Rusesabagina, “sharing laughs and drinking, leading the rest of us to wonder when one of them might simply pull a gun and shoot us for the sport of it.” The movie’s release prompted Kayihura to start working on a book with his version of events. Its publication in April brought protest from Rusesabagina, a Hutu who now lives in Texas and operates a foundation that promotes a truth and reconciliation commission for Rwanda. Rusesabagina said in an interview that he had no way of knowing who was friend and who was foe among the armed men who passed through the hotel during those tense weeks in 1994. And, he said, he managed meager food and water as best he could under trying circumstances. “The most important mission was to save the maximum of lives, and I happened to save all the people who came to my hotel. None was killed. None was picked up. None was beaten.” The siege lasted until the end of May, when the hotel refugees were exchanged for hundreds of Hutu prisoners being held by a Tutsi opposition force. Kayihura lost many family members in the genocide. Afterward, he returned to his work as a prosecutor, helping the coalition government that formed after the slaughter to prosecute those responsible. He moved to the United States in 2000 and married a Rwandan woman, who works as a social worker in central Ohio. He received a degree from Ohio State University’s Moritz College of Law but hasn’t worked as a lawyer. Spreading the word about his book is his main occupation. Kayihura, whose English is limited, wrote the book with Kerry Zukus, a New Jersey author who has written or co-written more than 40 books. Zukus said Kayihura’s story has been corroborated by others who were in the hotel. “I believe he is absolutely telling the truth.” Rusesabagina also has supporters — including Terry George, director of Hotel Rwanda, who wrote recently in a Huffington Post blog that Rusesabagina is the victim of a smear campaign motivated by Rwandan politics. In the forward to his book, Kayihura said he is grateful that Hotel Rwanda brought the genocide to the attention of Americans. But he deplores the distortions that, he said, made a hero of the hotel manager. “His voice has been heard,” he wrote. “Now is the time for the voices of other survivors.” *Source Columbus Dispatch]]>