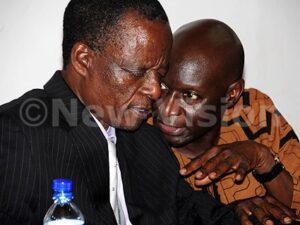 UPC president Otunnu Olala speaks to CP president Ken Lukyamuzi during a joint press conference at the FDC head office, on Monday. PHOTO.Eddie Ssejjoba
newvision[/caption] A closed-door three-day retreat organized by opposition leaders at Ankrah foundation in Mukono has resolved that a sole candidate be fronted to face-off with President Yoweri Museveni in 2016. According to the DP officials, the opposition leaders also agreed during the retreat that an all-inclusive national consultative meeting be convened on July 28 so that Ugandans can debate the political landscape of the country ahead of 2016. According to DP spokesperson, Fred Mwesigwa, it was suggested during the Mukono retreat that NRM leaders, including President Museveni, cultural and religious leaders, opinion leaders and other concerned citizens be given invitation letters for the national consultative meeting that would take place at Mandela National Stadium in Namboole. The meeting that started on Friday last week ended on Sunday with Muntu and Mao rallying the opposition to understand the need to build grass root structures as a tool of deepening their support among Ugandans. The opposition also resolved to intensify the ongoing campaign for free and fair elections and leaders such as Maj.Gen. Mugisha Muntu (FDC president), Norbert Mao (DP president), Olara Otunnu (UPC president) and John Ken Lukyamuzi (CP president) urged their opposition colleagues to avoid violence as a method of regime change. “The meeting resolved that we shall remain united and work together. The meeting also agreed that as citizens we shall go ahead and convene an inclusive national consultation meeting to build a political consensus,” Mwesigwa said. Meanwhile, DP condemned the Kenyan bombing this week that claimed over 50 lives in Lamu, a Kenyan coastal town in Mombasa. The Somali-Islamists, Al-Shabaab have been linked to the attack. Expressing their condolences, DP officials urged the Kenyan government and all East Africa governments for vigilance on the regional approach to combat terrorism. *newvision]]>