But the company may drill near the home of endangered mountain gorillas in the future.   By Jon Rosen* 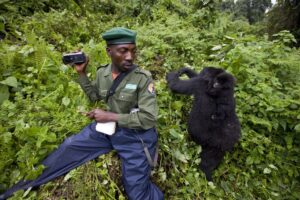 In the face of global pressure, the British oil and gas firm Soco International announced Wednesday that it will not drill for oil in Virunga National Park as long as the park remains fully protected under the UNESCO World Heritage Convention.

The announcement was part of a joint statement released by Soco and the World Wildlife Fund (WWF), one of several conservation groups that have challenged the legality of a 2010 contract signed by Soco and the government of the Democratic Republic of the Congo (DRC). The contract granted the company exploration rights to a concession that includes roughly 50 percent of Virunga, Africa’s oldest and most biodiverse national park and home to 200 rare mountain gorillas.

Soco’s announcement comes after a period of mediation between the company and the WWF, prompted by the WWF’s filing of a complaint with the British government last year that alleged Soco’s activities in Virunga had violated multiple provisions of the Organisation for Economic Co-operation and Development’s Guidelines for Multinational Enterprises.

In the statement, Soco said that it “commits not to undertake or commission any exploratory or other drilling within Virunga National Park unless UNESCO and the DRC government agree that such activities are not incompatible with its World Heritage status.” The company reiterated its earlier pledge to “never seek to have operations in the Mountain Gorilla habitat, the Virunga Volcanoes or the Virunga equatorial rainforest.”

Soco’s statement also notes that it will complete the existing phase of its contract with the DRC government, which entails the completion of a seismic survey that it expects will conclude within 30 days.

Virunga National Park stretches along the Albertine Rift in the Democratic Republic of the Congo and includes parts of Lake Edward’s shore. Almost two-thirds of the lake and about half of the park are within Block 5, an area where Soco International was licensed for oil and gas exploration in 2010.

Although the WWF has hailed Soco’s decision as a “victory for our planet,” the announcement falls short of ensuring the company won’t return to the park in the future.

According to Roger Cagle, Soco’s deputy CEO, the company may consider future drilling in Virunga should the DRC government and UNESCO negotiate changes to its status under the World Heritage Convention—either by altering the park’s boundaries to exclude potential oil drilling zones or removing it as a World Heritage site entirely. In 2012, as Cagle notes, UNESCO accepted a boundary change to Tanzania’s Selous National Park, also a World Heritage Site, which enabled the mining for uranium. That decision could be cited as a precedent.

In the past, the DRC’s Ministry of Environment has also suggested the possibility of “degazetting” Virunga as a national park, which would remove its protected status under domestic law, and potentially facilitate the removal of its World Heritage protection.

“For now, we are going to give the results of our seismic survey to the government, which fulfills our legal obligation,” Cagle told National Geographic, noting that it will take anywhere from six months to two years before the data collected will indicate whether future exploratory drilling may be warranted.

“We won’t return under the way things exist currently. But we hope the two main actors—the DRC government and UNESCO—can get together and find the best way forward for all parties concerned.”

With such possibilities still in play, not all Virunga stakeholders have responded to the announcement with the optimism of the WWF.

“While we welcome any move by Soco International to leave Virunga National Park, the situation in the news as it stands leaves more questions than it answers,” said Joanna Natasegara, producer of the feature-length documentary Virunga, which is highly critical of Soco’s activities in the park. “This is certainly a conditional withdrawal.”

Isaac Mumbere, a DRC-based human rights activist and prominent critic of oil drilling in the park, told National Geographic that he is similarly guarded, suggesting that the DRC government could still downgrade the status of all or part of the park.

In addition, he warns that activists who have challenged the Soco contract may still face the risk of reprisals—including arrests and threats of violence that have been widely documented by local and international watchdog organizations.

One particularly damning report, published on June 4 by Human Rights Watch, contains detailed allegations from activists and park rangers who accuse Soco “representatives” and “security contractors” of offering bribes to “gain their support or to discourage them from speaking out against oil exploration in the park.”

The report also implicates Congolese government, military, and intelligence officials—including some that had allegedly received money from Soco—in a series of threats and attacks against human rights and environmental activists.

Although it stops short of assigning blame for the attempted assassination of Virunga chief warden Emmanuel de Merode, who survived an ambush by unknown gunmen in April, Human Rights Watch cites a series of threatening text messages received by local activists that insinuate the shooting may have been linked to his opposition to oil exploration in Virunga.

Cagle, who told National Geographic he was “appalled” by de Merode’s shooting, has responded to the report’s accusations. In a letter to Human Rights Watch, he wrote: “We have not been provided with sufficient information in order to fully investigate the allegations you have presented. However, from those investigations we have been able to conduct to date, we have not found the allegations raised to be substantiated or justified.”

Whatever the case, Mumbere and other activists say they are happy to see Soco go, but have refused to declare victory just yet.

“In short, today’s decision is a positive step,” Mumbere says, “but it’s not yet time to drink champagne.”

*Culled from National Geographical Jon Rosen is a freelance journalist based in Kigali, Rwanda.
]]>