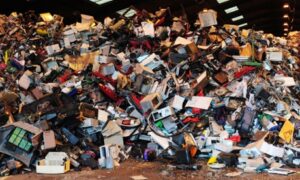 Electrical goods being legally recycled. Joe Benson illegally exporting 46 tonnes of hazardous waste to Nigeria, Ghana, the Ivory Coast and the Congo Photograph: Owen Humphreys/PA[/caption] A waste dealer has been sentenced to 16 months in prison for illegally exporting tonnes of hazardous electrical waste to Africa, the Environment Agency said. The agency’s investigators found broken cathode ray tube televisions and ozone-depleting fridge freezers in four containers intercepted at ports between September 2012 and April 2013. Joe Benson, 54, of Broad Street, Loughton, Essex, was sentenced to 16 months in prison at Snaresbrook Crown Court for illegally exporting 46 tonnes of hazardous waste to Nigeria, Ghana, the Ivory Coast and the Congo. He had earlier pleaded guilty. He collected the electrical waste from civic amenity sites in London and the Home Counties and took it to his licensed waste site in Walthamstow, where it should have been tested for functionality and safety before being exported, the Environment Agency said. It is thought he stood to make around £32,000 from the export of the intercepted containers, making money by collecting the waste and selling it on, and avoiding the costs of dealing with it safely. It is the first time a defendant has been sentenced to a custodial sentence for illegally exporting waste. Benson was previously convicted of exporting similar hazardous waste to Nigeria in 2011, and was appealing against his conviction – unsuccessfully – while continuing to illegally export televisions and freezers to West Africa, the Environment Agency said. Electronic waste exported to African countries, which do not have the infrastructure to handle it safely, can end up in large-scale dumps where products are stripped or burnt to extract valuable metals, causing pollution and health problems. Dumped electronic goods can contain hazardous materials such as lead, phosphors and ozone-depleting gases. Andrew Higham, who leads the Environment Agency’s national environmental crime team, said: “These are not victimless crimes. The rules governing the exportation of waste electrical equipment are in place for good reason, to protect human life and the environment. It is illegal to send hazardous waste to these countries. Mr Benson has seen fit to flout the rules for his own personal benefit.” Director of regulated industry Harvey Bradshaw, said: “This sentence is a landmark ruling because it’s the first time anyone has been sent to prison for illegal waste exports.” *theguardian]]>