Has Africa’s media been hijacked by the vanity of ‘catwalk news’? 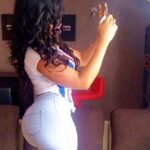 In recent weeks, Kenyans have been gripped by news of two women’s bottoms.

For one lady, her behind has turned into a human rights issue. For the other, it is an enterprise.

And for those like me who turn on the TV for serious news, we have become lost – which leads me to ponder our news values.

But first some background.

Linda Okello is a police woman who has served the Kenya police force for 11 years.

Until April this year, no-one beyond her family, colleagues and circle of friends knew who she was.

But when a national newspaper decided to publish a photo of Linda Okello as she performed her police duties, everything changed and she became an instant newsmaker in Kenya.

The tight skirt she wore that day, revealing a well-endowed behind, has continued to be the subject of lively debate in Kenyan media.

Some felt that by choosing to focus on Ms Okello’s skirt, the media itself had turned to trivia.

But when the police unwisely chose to take disciplinary action against the officer, Kenyans came to her defence with a huge outcry especially on social media.

I was among those who felt strongly that the police action was a case of misplaced priorities.

In a country grappling with insecurity, the police have far more pressing issues to deal with than chasing skirts.

Eventually the police backed down.

But Ms Okello has gone ahead and sued the police force.

She wants the court to declare that the disciplinary proceedings that had been started against her allegedly untidy mode of dressing were illegal and intended to embarrass her.

Then there is Vera Sidika, a Kenyan celebrity who is famous and controversial on account of her backside.

She was on national television last week where for 20 minutes she was interviewed about her look, skin lightening, and – well, that bottom.

When asked why she is in the habit of flaunting her rear, Ms Sidika had a snappy response: “It’s part of my body, am I meant to cut it off?”

So that has become part of our evening news diet here in Kenya.

And even for a God-fearing married man like myself, who is determined to discipline where my eyes look – an act that is itself a herculean test – the failure rate is very high.

Nipped in the bud

That is partly because even the very process of delivering the news to the viewer has been hijacked by vanity.

Some of our female news anchors worry more about what and how much they show of themselves than the news content they deliver.

It does not help that these days the newsreader has been liberated from the desk and is now free to wander around the studio set.

Some now call it “catwalk news”.

Sadly then, our news values have sunk to the very bottom.

I became even more disheartened while attending an African media leadership and ethics conference in Johannesburg last week, when I learnt that these practices are alive and kicking in other parts of the continent.

The editors attending the meeting decried the fact that today many of the young broadcasters are attracted to the profession, not by calling or by a desire to tell the stories of society’s struggles for a better or just world.

Rather the ambition is quick and easy money, fame and its by-products.

My own catwalk approach to news anchoring was nipped in the bud early in my journalism career.

I remember the day I sat at the staff canteen soliciting feedback about my performance shortly after starting to read the TV news on the Kenyan Broadcasting Corporation.

“How did I look last night?” I asked a colleague.

Even before my friend could answer, an elderly editor who was quietly listening to our conversation as he navigated his way round his plate of rice and matumbo (tripe) jumped in.

“Young man, it’s not about how you look – it’s about what you’re reading and whether the audience can understand and follow,” he said.

This basic lesson in mass communication has never left me.

After a 20-year career at the BBC, 10 of them as a senior editor, today I spend much of my time helping to shape African journalists of the future and desperately steering them away from the catwalk to the professional run.

I teach broadcast presentation on a part-time basis at the University of Nairobi and my first question to each new class is always: “What motivated you to pursue journalism?”

If the answer is “to tell stories, or reflect people’s lives” then my heart jumps with joy.

But when the response is “because I have the looks or I want to be famous”, then my heart sinks.

It means that in a few years I will switch on my television only for my attention to be grabbed by bums.