The silent recolonisation of Africa is happening on a mass scale. To address this issue, the first Africa Conference on Land Grabs is set to take place in South Africa on 27–30 Oct. 2014. Land is the source of life and death, but it might not always be with us. 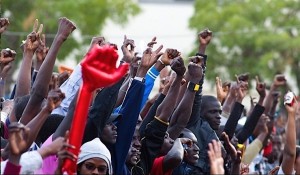 Land-grab-protests-in-Senegal-2012-Photo-Ndimby-Andriantsoavina[/caption] One of the reasons South Africa’s apartheid system is said not to have vanished with the swearing in of Nelson Mandela as President is the question of land. The colonial system was complete in places where land ownership was taken away from the colonised, and decolonisation remains incomplete if the land does not return to its rightful owners, those who were brutally and slyly dispossessed. Tragically, a silent recolonisation on a mass scale is happening through further dispossession in areas where the original colonisation had not been complete. The new colonisation is dressed in the language of economic development and fighting poverty but its interest is the satisfaction of the needs of multinational companies for markets and land to grow food for export – to satisfy the food needs of their primary market while depriving Africans the satisfaction of their needs. Land is the source of life and death Land is not just a material possession. The 1997 Church Land Conference in Johannesburg was indeed accurate in noting that land is and should be above commerce and politics, that land is the source of life and death, like a mother who gives her children sustenance without which they would perish. As Andile Mngxitama reports in The Chimurenga Chronic April 2013 edition, land is always with us, it gives us life and when we die, it takes us back. In the same article, Andile narrates the story of Sipho Makhombothi, the founder and now deceased leader of the Landless People’s Movement, who left instructions that on his death, he should be buried near his ancestors, on their and his land. Militant members of the movement indeed honoured his wish and buried the activist on the land, in defiance of guns and dogs belonging to the White ‘owners’ of the same land. Two years after the burial, Makhombothi’s body was exhumed under court order. Andile reminds us that “Makhombothi’s bones – landless in life, landless in death – still scream for justice across the fields and plains of Mpumalanga.” 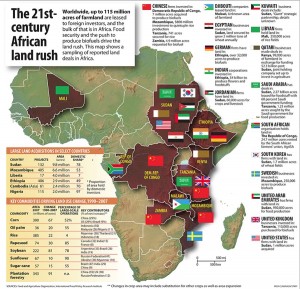 The effects of colonial era land grabbing are not only visible in South Africa. Kenya’s tale of land-owners and squatters, of political families that own entire counties as rewards for political deals with the ‘departing’ colonialists remain an open sore during electoral campaigns. The case of Namibia, where residents of European countries still own huge chunks of land native Namibians have no access to is another sign that decolonisation of the land is still far from reality Repossession was bad for Zimbabwe. Really? The case of Zimbabwe’s repossession of hitherto-White farmer owned land is perhaps the most known attempt at the decolonisation of the land. It has been heavily criticised by Western media and branded as an act of an almost mad and senile man, Robert Gabriel Mugabe. The neo-liberal capitalist in the true imperial fashion has preached that the repossession is bad for the African. Food shortage in the country has been blamed on the repossession, despite the fact that the White farmers used to export more food than they supplied to the Zimbabwean market when they owned the farms. The thirst for land by extreme capitalists is insatiable. Thus, parts of the continent that had almost survived the original land colonisation have to be recolonised, and those where the land was effectively ‘stolen’ consolidated. Protests in Uganda Since the end of active hostilities in Northern Uganda, the war has turned to the land. With residents migrating to camps for protection and refuge, most of their land remained bare alongside communally-owned land. With ‘commercial’ farmers like the Madhivani group and the discovery of oil deposits beneath much of this land, the post-conflict period has seen new forms of land conflicts emerge between the commercial farmer and government on one hand and residents who do not want to part with ownership of their land. The government claims it wants the land on behalf of the commercial farmer to grow sugarcane, and consequently the economy, but some critics think this is a disguised attempt at disenfranchising the people, especially that oil deposits have been reported to be in plenty beneath the same land. The resistance against this recolonisation has taken on conventional and non-conventional methods. Women in the Amuru district – where the land grab machinery has invested both sly and direct intimidatory means – undressed in protest against political leaders, an act considered the most severe expression of displeasure and discontent. The wrangle continues. It is a big political issue, accusations of bribery of politicians by the corporate monsters are rife, but there is still hope that the people may prevail. In Southern Uganda, in somewhat dissimilar circumstances, the people objected to the award of the Mabira forest-land to another sugar plantation-farmer in 2007. A huge demonstration in Kampala, that saw some Indians and Asians victimised by the demonstrators and some of the demonstrators gunned down by the army and police expressed the mass disapproval of the government plans. Kabaka Ronald Muwenda Mutebi, the reigning king of Buganda, where the forest is located, offered his own land to the sugar-cane grower in return for the forest, but his offer was rejected. On paper, it was reported that the land grab was stopped, but some press subsequently reported that some parts of the forest had been grabbed and were being used for sugar-cane growing anyway. The African Union is complicit 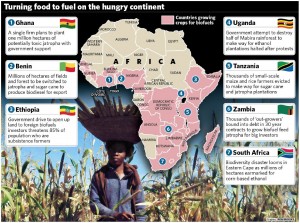 The language of development and economic production is rife in the land grab justification. Like the 19th century colonisation, the new wave of land grabbing is allegedly well-intentioned. It is also well-planned, in the same way the 19th century colonisation was well hatched by European powers of the time. Ironically, the African Union is complicit in this new plan. The core plan comprises the G8′s “New Alliance for Food Security and Nutrition in Africa” and the Alliance for a Green Revolution in Africa (AGRA). According to the African Centre for Bio-Safety, “opening markets and creating space for multinationals to secure profits lie at the heart of the G8 and AGRA interventions”. The Centre has labelled the plans as a new wave of colonialism. The plans include the harmonisation of laws across Africa to favour foreign direct investment in agriculture, ease land ownership laws to favour foreign multinational companies and allow the use of genetically modified seeds. All this compromises the ability of the majority small-scale farmers, the so-called subsistence farmers who grow food for their own consumption and a surplus for the market in order to continue producing for their own consumption, not to mention the market. Dis-empowering such people means controlling their lives and turning them into consumers of products they can’t produce. The use of genetically modified seeds enables multinational companies to collect royalties from farmers who use the seeds, thus destroying the seed varieties cycles that have proved sustainable on the continent for time immemorial. The recolonisation plans are already working. A report published in April 2014 by UK campaigning group World Development Movement (WDM) titled Carving up a continent: How the UK government is facilitating the corporate takeover of African food systems showed that “huge tracts of land in African countries with access to the sea and high economic growth are being targeted by corporations such as Monsanto and Unilever with help from the British and American governments”. According to the report, agreements signed with key African countries Benin, Burkina Faso, Ethiopia, Ghana, Ivory Coast, Malawi, Mozambique, Nigeria, Senegal and Tanzania expose huge tracts of African land to a risk of being grabbed by multinational companies under the guise of fighting poverty and food insecurity. As the African Centre for Bio-Safety reported, huge projects such as the ProSavanna project in northern Mozambique are already displacing farmers from their land and imposing large-scale production structures for export. They add that “actual farmers are separated from the land and the only realistic option for a livelihood.” Like the 19th century colonisation project, some African entities are cooperating in this new wave of colonialism; latter-day governments, to wit. They are the ones signing these agreements and lending their coercive machinery to the multinationals to evict small-scale subsistence farmers from the land. The faulty development mantra that the market is a fix for all needs – including basic needs – does not consider the fact that most African populations, as reported by The Guardian (UK), are “fed by smallholders as opposed to corporate farming, which tends to focus on exports and rich markets.” Like 19th century colonialism, the New Alliance strategy focuses on using Africa as the production grounds for the consumption needs of Western markets. The food security and sovereignty of African local populations is of no concern for the multinationals and the foreign governments funding their activities in Africa. In 2012, Human Rights Watch reported that the Ethiopian government had forced tens of thousands of people off their land, and given it to ‘investors’. The BBC reported the land was bought by Chinese and Saudi Arabian ‘investors’ who intended to grow more than one million tonnes of rice on it, to export to their countries. In Liberia, a community in Grand Bassa county is resisting the encroachment of Equatorial Palm Oil (EPO), a British palm oil company on their land. Around 169,000 hectares had allegedly been allocated to the company by the government, without consulting over 7,000 people of the Jogbahn clan who have lived on the land for several generations. Skirmishes involving the company’s security unit and the Liberian Police Support Unit have not shaken the resolve of the people to defend their land, and as of May 2014, Ellen Johnson-Sirleaf, the Liberian President, has promised to halt the grab, although the company has not acknowledged the presidential statement. As a result of the increasingly deteriorating situation, the first Africa Conference on Land Grab is being organised, scheduled for 27–30 of October 2014 at the Pan African Parliament, South Africa. The conference will feature various speakers who will focus on a range of country case-studies of land grabbing in Africa.  One hopes that a feasible resistance strategy is hatched to halt the recolonisation of the continent.   *Source This is Africa .Bwesigye bwa Mwesigire is a Ugandan writer, academic, and lawyer. Bwesigye is the author of Fables out of Nyanja and Finding Foot as an International Court; The Prospects and Challenges of the East African Court of Justice.]]>