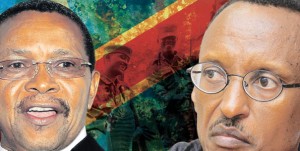 Diplomatic tensions between Tanzania and Rwanda appeared set to escalate as the two countries once again traded accusation over the latter’s alleged backing of rebels in eastern Democratic Republic of Congo.

Rwanda’s Foreign Affairs Minister Louis Mushikiwabo on Friday responded to the claims by her Tanzanian counterpart Bernard Membe that the defunct M23 rebel forces that fought the DRC government until recently was a creation of the Rwandan government, saying, “That M23 business is a tired story that has no place in the region right now.
“As for Tanzania’s foreign minister whose anti-Rwanda rant in parliament I heard, he would benefit from a lesson in the history of the region.”
Mr Membe, while appearing before the country’s parliament, is reported to have said: “When I told the BBC that Rwandans were causing instability in eastern Congo, I meant what I said… it’s the UN’s Group of Experts that originally accused Rwanda, not me.”
“Rwanda and other reasonable actors in the region and afar are engaged in finding lasting peace, so we can dedicate more time to improving the lives of our citizens,” Ms Mushikiwabo said in an e-mail to The EastAfrican.
This is not the first time the countries are trading barbs. Tension was initially sparked off by President Jakaya Kikwete’s suggestion in May 2013 during an African Union meeting in Ethiopia that the Rwandan government should hold peace talks with the FDLR rebel group to end violence in the eastern DRC. Rwanda, which regards the Hutu group as genocidaires who played the leading role in the 1994 genocide, termed President Kikwete as a “sympathiser” of the FDLR.
While addressing senior military graduates in north Rwanda, President Paul Kagame noted in reference to President Kikwete’s advice, “I kept quiet about this because of the contempt I have for it. I thought it was utter nonsense. Maybe it was due to ignorance but if this is an ideological problem for anyone to be thinking this way, then it better stay with those who have it.”
Sources say the two leaders have tried to avoid each other by dodging meetings and scenarios that could bring them together. At regional level, they say, the Heads of State Summit is needed to sign off on key protocols, but the soured relations between the two vitiates the atmosphere required to promote the integration process. Mr Membe was reacting to concerns expressed by Ezekiah Wenje, the shadow foreign minister, while presenting alternative budget proposals in parliament, that the allegations Membe made against Rwanda on BBC’s Focus on Africa programme last September would worsen the diplomatic tensions between the two countries.
But Mr Wenje said Mr Membe’s comment, together with the government’s silence on claims by former Rwandan prime minister Faustine Twagiramungu that he had visited Tanzania to seek advice on how FDRL could take over in Rwanda, would only serve to deepen tensions between the countries.
Be careful
“The statement by Mr Membe will worsen the relationship with our neighbour Rwanda. It is important that national leaders be careful about making such statements,” said Mr Wenje. Mr Membe acknowledged that relations between Rwanda and Tanzania were strained because opportunists took advantage of the situation to fuel diplomatic tensions between the countries.
However, Mr Membe reiterated that the Democratic Forces for the Liberation of Rwanda (FDLR) were Rwandans, who fled to eastern DRC after the 1994 genocide while the Banyamulenge who formed the M23 rebel group that fought the DRC government for years, were Tutsi from Rwanda.
Tanzania’s recent decision to expel 3,500 Rwandese illegal immigrants heightened the tension *Source East African
]]>
0