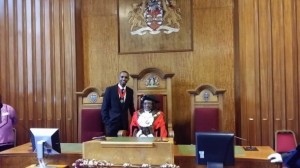 Councillor Elizabeth Kangethe is now  Her Worship the  Mayor of Barking & Dagenham in UK.The Kenya High Commissioner in the UK HE Ephraim Ngare and his wife Mrs. Jane Ngare joined other invited guests at the historical Mayor Making of Mayor Elizabeth Kangethe on Friday 6th June 2014 at the offices Barking and Dagenham council, Town Hall, Barking, London. The colourful ceremony was officiated at the Council Chamber where it was witnessed by full council meeting. The head of the council, Councillor Darren Rodwell proposed for the confirmation of Mayor Elizabeth Kangethe and then it was seconded by councillor Sanchia Alasia. The outgoing Mayor, Councillor Hardial Singh asked the Chief Executive to conduct the vote and all the councillors voted for her. The outgoing mayor asked the newly elected Mayor Kangethe to come to the dais to read the declaration of acceptance of her appointment and sign the book. The Chief Executive also signed the book. The Chief Executive announced that the newly elected mayor was to leave for 10 minutes to go and put on her mayoral robes and chains. After 10 minutes the newly elected mayor returned, took her seat and then addressed the council and the guests. The newly elected mayor closed the meeting and was escorted with her party to the Mayor’s chamber. All the guests were then invited to the Committee Suite for food and drinks. Food and drinks were in plenty. Among other guests was PCEA Moderator Rev. David Gathanju and Rev. Edwin Kibathi. *Source jambonewspot]]>