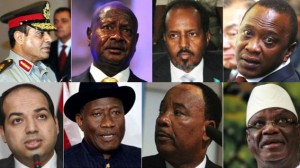 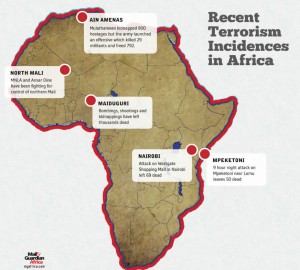 These groups are today better armed, highly radicalised and seemingly determined to escalate their attacks beyond their strongholds. Judging from the pattern of Al-Shabaab and Boko Haram attacks, in Kenya and Nigeria, the aim would seem to be to undermine social cohesion and foment inter-religious conflict. Recently in Kenya in growing hostility to Somalis, they seem to be succeeding. These relentless and ferocious campaigns of violence, coupled with the abduction of hundreds of schoolgirls have created a profound sense of alarm and despondency. It is also undermining faith in the military, security services, and the political class. President Goodluck Jonathan is particularly vulnerable ahead of the general elections in 2015, with some pundits predicting he could be voted out by an electorate angry at his handling of the security crisis in the north and the response to Boko Haram.   The Algeria model In many of the African countries currently threatened by resurgent Islamist militancy and violence, there is a growing body of opinion in favour of a strong leader. Algeria’s costly and protracted suppression of Islamism is often cited as a model worth emulating. Strongman image rehabilitated Egypt, in particular, is one country where the fear of militant Islamism and anarchy has rehabilitated the image of the African strongman and catapulted an army general, Abdul Fattah al-Sisi, to power. Echoes of this tendency to “securitise” the state and legitimise force to clamp down on all forms of dissent can be found in countries as diverse as Uganda and Ethiopia. The security state has clear advantages over the liberal state in the war against jihadi groups, but only in so far as it allows such as a state to be more effective in tightening the lid on the jihadi pressure cooker. This may buy beleaguered regimes some time, but unlikely to fundamentally change the situation in the long term. To reverse the tide, states will need to demonstrate seriousness and resolve to work in concert to resolve/pre-empt conflict and stabilise troubled hotspots that incubate militancy (Libya, Somalia, Mali); improve intelligence gathering and sharing at domestic and regional levels; reform and strengthen state institutions; create inclusive and fairer political systems; distribute state resources evenly and work in partnership with Muslim communities to undermine extremist ideas and youth alienation. *Source M & G]]>