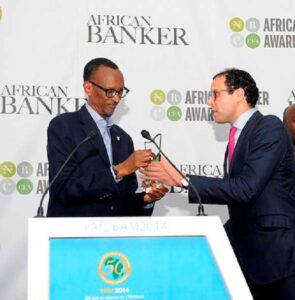 President Paul Kagame, yesterday received a ‘Special recognition award’ from the African Development Bank (AfDB) for his pivotal role in leading Rwanda’s economic growth and transformation. The award was handed over to President Kagame during at the African Banker Awards 2014 ceremony at the ongoing AfDB annual meeting taking place in Kigali. The annual event seeks to recognize the reforms, rapid modernization and expansion of banking and finance in Africa. The awards also recognize those who have been instrumental in maintaining excellence and best practices, along with the outstanding achievements of individuals and companies that have changed the perception of Africa’s potential in domestic and international markets. Speaking after handing over the award to Kagame, Omar Ben Yedder, the Publisher of African Banker Magazine which organizes the event, recognized President Kagame for his role in driving Rwanda’s achievements as well as spearheading the economic growth and transformation that the country has registered over the last 20 years. “President Paul Kagame has set a powerful benchmark of excellence for future generations of leaders to follow,” said Yedder. In his speech, President Kagame attributed the award to Rwandans who have sacrificed in many ways to put Rwanda where it is today. “Rwandans have made me the kind of leader that I am and given me the strength that has added up to taking our country forward. As we celebrate, we must think about doing more and sustaining what we have achieved,” Kagame said. The head of state added that Rwanda will continue to work with AfDB in quest of efforts that will make Africans better. According to African Banker Magazine, over the years, the quantity and quality of entries has been increasing which attests to the readiness of African banks and financial institutions to showcase to the world the good work they have been doing. Ben Yedder observed that the entries they have received this year show transformational transactions in critical development areas such as power, transport and agriculture. “Substantial projects are now being structured and financed by African banks in collaboration with international partners,” he said. The ceremony saw a number of financial institutions receive awards. The list of big winners included GT Bank from Nigeria which was crowned the African Bank of the Year and Bank of Kigali (BK) which emerged as the Best Bank in East Africa.]]>