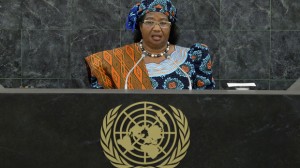 Fellow Malawians,I would like to first of all, thank all Malawians that took part in the just ended, first ever tripartite elections. Despite isolated incidences of disturbances, Malawians generally embraced peace throughout the election period and exercised impeccable patience as we awaited the conclusion of the elections. I commend all Malawians for the patience exercised during this delicate time of transition.Last evening, on 30th May 2014, the Malawi Electoral Commission announced the Presidential results of the Tripartite Elections that were held from Tuesday, 20th May to Thursday, 22nd May 2014. I take this opportunity to sincerely congratulate the President Elect Professor Arthur Peter Mutharika and the Vice President Elect Mr. Saulos Klaus Chilima on their victory in an election that was closely contested. I wish the President Elect and the Vice President Elect every success as they take up the mantle of leadership for the nation of Malawi. It is my prayer that the new President and his Government will successfully guide our nation to greater heights of prosperity I would like to thank all Malawians for the support rendered to me and my government during my term in office as President of this great Republic.It has been an honor and privilege to serve my country, Malawi, and more so as the country’s first female president. During my term, significant reforms that aimed at taking the nation to the right development trajectory were implemented, and I appreciate the support and encouragement that Malawians and all other well wishers gave me during these reforms As I leave office today, I am happy that there are visible positive outcomes of these reforms in the macro economy, in governance and observance of human rights, in food security, in women’s empowerment, in rural development and international relations to mention but a few. I am happy that the country is at a better place than was the case when I assumed office in 2012. I therefore wish to take this opportunity, to urge all Malawians to support the newly elected President Professor Mutharika and his Government as they take on this foundation of progress and endeavour to develop Malawi even further. In conclusion, while these elections have been tense, I would like to urge all Malawians to move forward as one nation, to remain united, to uphold the rule of law, and continue being peaceful and calm as we head into the next fifty years of Malawi’s future. May God continue to protect and bless our Nation, Mother Malawi. I thank you for your attention President Dr Joyce Banda Republic of Malawi *Courtesy of News of the South]]>