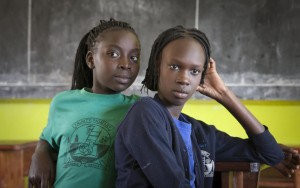 In this photo taken Wednesday, April 9, 2014, two South Sudanese teenagers who previously lived in Israel listen to their friends reminisce about their time in Tel Aviv, in a classroom at the Trinity boarding school where they now live in Kampala, Uganda. Some 70 South Sudanese teenagers are attending boarding school in Kampala, their new home after they were deported from Israel, or voluntarily left, and after spending months in South Sudan, a country in which they struggled because of the threat of hunger and tropical diseases, the teens later were relocated to Uganda thanks mainly to the work of an Israeli activist who has criticized his country’s policy toward African migrants as Israel’s “moment of shame.” (AP Photo/Rebecca Vassie)[/caption]

That’s what Ugandan teachers repeatedly tell the South Sudanese teenagers transplanted here from Israel. But Hebrew is what they speak when they are not being watched; it’s the language they grew up with as migrants.

Some 70 South Sudanese teenagers now call Kampala their home after they were deported from — or voluntarily left — Israel, which is trying to rid itself of tens of thousands of African migrants. In recent years Africans have poured into Israel, causing friction with locals and alarming some authorities who say Israel’s Jewish character is threatened by the presence of the Africans.

After leaving Israel the teenagers spent a few months in their home country, South Sudan, where they struggled because of the threat of hunger, tropical diseases and the country’s political tensions. They later were relocated to Uganda thanks mainly to the work of an Israeli activist who has criticized his country’s policy toward African migrants as Israel’s “moment of shame.”

The 44-year-old activist, Rami Gudovitch, entered the lives of the teenagers as both father figure and friend, first by trying to prevent their impending deportations from Israel and then by finding families willing to sponsor their education in Africa. In December 2012 he put a group of them on a bus leaving the South Sudanese capital of Juba for Kampala, where the children hoped to return to school and start afresh as refugees. Many of those now enrolled at a private boarding school in Kampala have Israeli benefactors who pay their tuition of about $1,000, charity for which they are grateful but which doesn’t cancel the memory of the country they called home for much of their life.

They must adjust to a different culture and school system, often without the help of family. Many students who should be one or two years away from taking college-entrance examinations are now stuck in lower grade school because their English is not adequate, a serious consequence of the transition from Israel, where they were instructed in Hebrew.

“When they first came here they had a language barrier,” said Alex Gumisiriza, a science teacher who heads academic programs at Trinity School. “But now they are catching up.”

Several of the teenagers who spoke to The Associated Press said they left Israel in 2011 or 2012 and lived in South Sudan before coming to Uganda. The move had effectively broken up their families, with many going months without seeing their parents. Although some said their parents had chosen to return to South Sudan in response to growing anti-refugee sentiment in Israel, many were deported.

“We were told that in Israel they didn’t want refugees, that there were many refugees in the country,” said Victoria James, a bubbly 16-year-old student whose family lived in Tel Aviv. “It was very bad. I was going to live in a country that I knew nothing about.”

James said she misses her friends, who occasionally chat with her on Facebook, and her teachers. Quite a few of the students said they miss Tel Aviv’s big malls, of which there are not many in Uganda. Others recall the good basketball courts there.

Many of the African migrants pouring across Israel’s southern border with Egypt come from Eritrea and South Sudan, countries with a history of political violence and rights abuses. Israel has now built a fence along the border with Egypt, all but stopping the influx. It passed a law that allows for the migrants’ detention and said it has a deal with an unidentified country to host some of the Africans until they are able to return home. 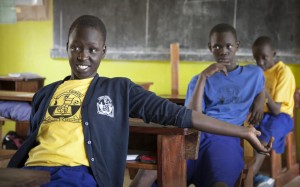 In this photo taken Wednesday, April 9, 2014, South Sudanese teenager Asunta Atoch, 16, left, who previously lived in Israel listens to her friends talk about their time in the country, in a classroom at the Trinity boarding school where they now live in Kampala, Uganda.[/caption]

An Israeli official told The Associated Press that Israel had begun sending dozens of African migrants to Uganda in a voluntary deportation campaign that Ugandan officials and refugee authorities insist they know nothing about. While there is no formal agreement with Uganda, the Israeli official said, Israel is paying up to $3,500 to each migrant who agreed to leave for Uganda. The official spoke on condition of anonymity because he was not authorized to speak to the media on this matter.

Migrants and activists said the arrangement, which includes a one-way ticket and a stipend, is questionable because it’s unclear if there’s an official agreement with Uganda to secure their status.

Gudovitch, the anti-deportation activist, said he was ashamed of Israel’s policy toward African migrants.

“Part of the Jewish tradition is to accept refugees,” he said. “I think Israel should protect refugees because we have been refugees and we don’t know the next time we shall be refugees.”

His group, an Israeli nonprofit called Become, supports the South Sudanese students as part of its efforts to help vulnerable children in the world’s poorest parts.

“They are Israeli kids,” Gudovitch said. “For me these kids are representative of my country.”