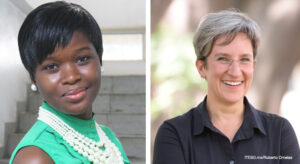 A Nigerian editor and a Mexican freelance journalist whose investigative reports exposed companies that seriously endangered public health have won the 2014 Knight International Journalism Award, the International Center for Journalists (ICFJ) announced. The award recognizes outstanding news coverage that makes a difference in the lives of people around the world. Oluwatoyosi Ogunseye, the editor of Nigeria’s Sunday Punch newspaper, revealed that a manufacturing plant’s fumes were making its neighbors seriously ill. Alejandra Xanic von Bertrab, a freelance reporter in Mexico, showed how companies flagrantly violated the law, in some cases causing massive deaths and injuries. “These journalists went the extra mile to expose health dangers,” said ICFJ President Joyce Barnathan. “Their coverage forced governments to take strong action to protect the public well-being.” The award is supported by the John S. and James L. Knight Foundation, which funds ICFJ’s Knight International Journalism Fellowships program. The fellows seed new ideas and services that deepen coverage, expand news delivery and engage citizens in the editorial process. “The winners exemplify the intent of the award, which recognizes innovative journalists who are focused on informing people and uncovering the truth as a way to build stronger communities,” said Michael Maness, Knight Foundation, vice president of journalism and media innovation. Ogunseye is the youngest and first female editor in the 40-year history of Sunday Punch, a widely read Lagos newspaper. In a three-part series, she proved that residents in a well-to-do community in Lagos had high levels of toxins in their blood caused by pollutants from a nearby steel plant. The coverage prompted the government to shut down the plant, and to allow it to reopen only under strict new regulations. In another report, she disclosed that a nuclear power plant was about to be built in a poor neighborhood. After her piece ran, citizens mobilized, sued the government and stopped construction. Her investigation into the death of a student who fell into a pit latrine resulted in a government initiative to replace the dangerous facilities. And her coverage of newborn babies dying at a top hospital in Lagos forced the hospital to buy more incubators for high-risk infants. In Mexico, von Bertrab is known for hard-hitting reports. One investigation revealed that fumes from gas leaking into Guadalajara sewers posed an imminent danger. Shortly after her story ran, the gases exploded, killing at least 200 people, destroying 26 city blocks, and leaving as many as 20,000 homeless. Last year, von Bertrab became the first Mexican reporter to win the Pulitzer Prize for investigative journalism. She and a New York Times reporter revealed that Wal-Mart of Mexico was paying bribes to expand its dominance in the country. The story prompted the company to commit to anti-corruption measures in other developing nations. A prestigious panel of judges selected the winners. Ogunseye and von Bertrab will be honored at ICFJ’s 30th Anniversary Awards Dinner in Washington, D.C., on Nov. 10. The International Center for Journalists advances quality journalism worldwide. Our hands-on programs combine the best professional practices with new technologies. We believe that responsible journalism empowers citizens and holds governments accountable. For more, visit www.icfj.org. The John S. and James L. Knight Foundation supports transformational ideas that promote quality journalism, advance media innovation, engage communities and foster the arts. We believe that democracy thrives when people and communities are informed and engaged. For more, visit www.knightfoundation.org.]]>