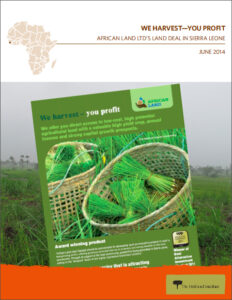 We Harvest–You Profit is a promise made by African Land Ltd., a UK-based company, that uses the idea of helping African communities, together with deception around yields and profits, to lure investors–including retired individuals–into handing over their life savings.

“African Land Ltd. offers an opportunity for land investment in poor countries like Sierra Leone that sounds too good to pass up. The Oakland Institute brief released today exposes unhappy investors; legal troubles with the Financial Conduct Authority (FCA), the UK’s regulatory agency; and misleading promises, which reveal a harsher truth,” said Anuradha Mittal, Executive Director of the Oakland Institute. In 2013, African Land Ltd. was brought to court by the FCA for allegedly operating a collective investment scheme (CIS) without its authorization and for providing false information to investors. In February 2014, the court ruled against African Land Ltd., a decision appealed by the company. “While the appeal is pending, we uncovered a renewed effort by African Land Ltd. to promote its scheme. In violation of court orders the company is seeking a sole investor to get around current legal problems, while ignoring the great hardship it has created for current investors and hiding its failure to bring any benefits for local communities,” said Mittal. African Land Ltd. is now seeking new investors while good-willed individuals have lost their life savings, lured by the promise of  “doing good” with their hard-earned money. “I was impressed by the high returns, two-year money back guarantee, and that the investment would provide employment, schools, and other benefits for the local people. Consequently I subleased land with promised returns of a minimum 15% a year, a two-year guarantee, and a high resale value. I have been awaiting returns since 2012, and have yet to receive a penny,” said an investor. Even worse, the Oakland Institute brief shows that the company used investors’ contributions to fill their own coffers, doing nothing on the ground. African Land Ltd. claims to bring technology and socially responsible investment to Sierra Leone, with promises of high returns to investors and social benefits for locals. The Oakland Institute’s brief shows that African Land does nothing close to this. In testimony provided to the Institute, the local Paramount Chief details that the African Lands farm is in shambles, the few locals who were employed have still not been paid, and the promises of benefits for the local community, such as free food, a school, roads, and a health center, only exist in African Land Ltd.’s promotional materials. Court orders don’t deter the individuals at the helm of African Land Ltd. As the brief shows, the people behind it leave a trail of closed and reinvented companies. “It is heartening to see a regulatory agency like the FCA take action in the country of origin of investors, a unique development in the recent trend of land grabs. We hope that this brief will further embolden this effort to prevent dishonest land deals and investments. Africa needs real agricultural investment, not more promises that mislead investors and damage local communities,” said Anuradha Mittal. *Sourc oaklandinstitute
]]>