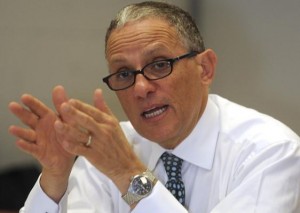 FRED HOCHBERG[/caption] The Export-Import Bank of the United States (Ex-Im Bank) today announced that the Bank has authorized $1.1 billion to finance U.S. exports to sub-Saharan Africa in the first seven months of fiscal year 2014. The announcement was made as Ex-Im Bank Chairman and President Fred P. Hochberg participated in the U.S. Africa-Energy Ministerial, June 3 – 4, 2014, in Addis Ababa, Ethiopia, with Department of Energy Secretary Dr. Ernest Moniz. The event is being attended by 350 business leaders and government officials, including more than 30 African energy ministers. The ministerial is building upon President Obama’s Power Africa initiative and will explore strategies to accelerate the development of clean-energy sources and the adoption of energy-efficient technologies. It will also review best practices in the development of oil and gas resources, policy and regulatory issues, investment opportunities and financing. Chairman Hochberg participated in a panel discussion of government and multilateral tools for encouraging energy financing. “Ex-Im Bank is committed to expanding U.S. trade with sub-Saharan Africa, which is home to seven out of 10 of the world’s fastest-growing markets. U.S. exporters are eager to realize the tremendous opportunities in this region, and the Bank is helping them to create and sustain American jobs by increasing their exports to Africa. We look forward to increasing financing for American-produced exports to Africa’s energy sector,” said Chairman Hochberg. In the past five years, Ex-Im Bank has authorized more than $5 billion for U.S. exports to sub-Saharan Africa, exceeding the Bank’s authorizations of $4 billion for the region approved over the previous decade. The Bank is also increasing the number of its sub-Saharan authorizations, the majority of which benefit small-business exporters of spare parts, consumer goods and other products supported through the Bank’s short-term export-credit insurance. In FY 2014 to date, Ex-Im Bank has approved over 100 authorizations for U.S. exports to the region and is on track to exceed the record-high level of 188 sub-Saharan Africa authorizations in FY 2013. ABOUT EX-IM BANK: Ex-Im Bank is an independent federal agency that creates and maintains U.S. jobs by filling gaps in private export financing at no cost to American taxpayers. The Bank provides a variety of financing mechanisms, including working capital guarantees, export-credit insurance and financing to help foreign buyers purchase U.S. goods and services. In the past fiscal year alone, Ex-Im Bank earned for U.S. taxpayers more than $1 billion above the cost of operations. In FY 2013, Ex-Im Bank approved more than $27 billion in total authorizations to support an estimated $37.4 billion in U.S. export sales and approximately 205,000 American jobs in communities across the country. For the year, the Bank approved a record 3,413 transactions – or 89 percent of total transactions – for small businesses. Small-business exporters can learn about how the Bank’s products can help them increase foreign sales at http://go.usa.gov/ZVTd. For other information about Ex-Im Bank, visit www.exim.gov.]]>