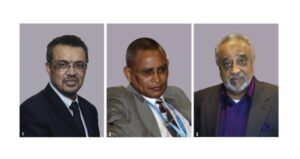 Tedros Adhanom Ghebreyesus (1), Debretsion Gebremichael (2), Mohammed Hussein Al Amoudi (3)
Read the original article on Theafricareport.com : Ethiopia: The post-Meles universe takes shape | East & Horn Africa
Follow us: @theafricareport on Twitter | theafricareport on Facebook[/caption] Prime Minister Hailemariam is developing a style of consensual politics, but some politicans and businessmen are having difficulty adjusting. The passing of Prime Minister Meles Zenawi in August 2012 has shaken up the business and political elite. Prime Minister Hailemariam Desalegn does not favour the top-down and snap decision-making practised by his predecessor, preferring instead to consult more widely. While this leads to a slower governmental machine, it protects the administration from the odd rash decision. This more collegiate style of governance has opened up the space for a cadre of influential top advisers. Old political hands Bereket Simon, who before Meles’s death had been slated to leave office in the next generational purge, and Abay Tsehaye are key members of a brain trust intended to replace the phenomenal intellect of the former Ethiopian People’s Revolutionary Democratic Front (EPRDF) leader. Tedros Adhanom Ghebreyesus (1) has eased into his new role as foreign minister. He had spearheaded the country’s remarkable health reforms and now has room to make a name for himself on the global stage. Unlike Meles, Hailemariam does not seem to crave the international spotlight. Tedros’s popular Twitter feed – he has nearly 24,700 followers – and his strong statements on Africa and the International Criminal Court while chairman of the African Union’s executive council, have given him increased visibility. Hailemariam’s appointment, soon after taking office, of two additional deputy prime ministers has given further clout to Debretsion Gebremichael (2), deputy chairman of the Tigrayan People’s Liberation Front (TPLF), one of the constituent parties of the EPRDF. Aside from his dual portfolio as deputy prime minister for the finance and economic cluster and minister of communication and information technology – the latter of which sees him in control of the Ethiopian Telecommunications Corporation (ETC) – he is also chairman of two newly created companies, Ethiopian Electric Power and Ethiopian Electric Services. Arguably, this makes him one of the most influential men in government. Azeb Mesfin, Meles’s once powerful widow, has suffered mixed fortunes since his death. Despite her failure to win the election for mayor of Addis Ababa, losing to former transport minister Diriba Kuma in July 2013, she remains a member of the political bureau of the TPLF, the EPRDF’s executive commit- tee and the Endowment Fund For The Rehabilitation of Tigray. Public and private The business world was rocked by the arrest in May 2013 of more than 30 suspects – including Melaku Fenta, director general of the Ethiopian Revenues and Customs Authority – on charges including tax evasion and receiving bribes. But Ethiopia remains a land of opportunity, if one goes by the number of private equity companies passing through Addis Ababa. The big state businesses like the Sugar Corporation and ETC remain unchallenged by private sector rivals. Brigadier General Kinfe Dagnew continues to look untouchable as he sits atop the Metals and Engineering Corporation (METEC). A state-owned industrial company consisting of close to 70 engineering enterprises and military hardware manufacturing entities, METEC is the only local contractor involved in the flagship $4.3bn Grand Renaissance Dam project. Another survivor of the Meles era, managing director of Ernst & Young Ethiopia Zemedeneh Negatu, is making a push into technology companies in his private capacity. In a well timed move into mobile banking and IT training, Zemedeneh is poised to reap dividends. Although he was powerful under Meles, Mohammed Hussein Al Amoudi (3)‘s star is no longer shining so brightly. Work on the Saudi Arabian and Ethiopian businessman’s enormous five-star hotel, situated on the compound of the African Union’s headquarters, stalled for several months last year. His company Saudi Star’s rice farm is not yielding results, and Pakistani company MCG Consulting, which had been working on the project, pulled out at the end of last year. *Source Africa Report]]>