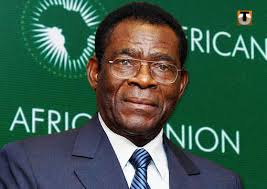 The president of oil-rich Equatorial Guinea lambasted foreign interference in Africa on Thursday, calling on the continent’s leaders to shake up their relationship with the West. Teodoro Obiang Nguema, hosting a two-day summit of the 54-nation African Union, urged leaders to put an end to economic dependence on Western nations since independence, saying this was holding back the continent from sustainable development. The 72-year-old president, who is Africa’s longest serving head of state after overthrowing his uncle in a 1979 coup, has overseen an economic boom in the tiny Central African nation since offshore oil was discovered in the mid-1990s. The former Spanish colony, with a population of less than 800,000 people, is Africa’s No. 3 energy producer behind Nigeria and Angola, hosting a slew of oil companies including Marathon Oil and ExxonMobil. Thanks to the oil boom, Equatorial Guinea boasts the highest GDP per capita in Africa but international aid agencies and rights groups say this masks a high wealth gap between the ruling elite and the country’s poor majority. “Times have changed. Africa has more than 50 years of independence submitted to a neo-colonial system which perpetuates the old colonial one,” Obiang told the continent’s leaders at the summit’s opening ceremony. “Africa should renegotiate relations with developed world.” Speaking in front of U.N. Secretary General Ban Ki-Moon and Spanish Prime Minister Mariano Rajoy, Obiang cited the pricing of natural resources and the “barriers to international trade

” as examples of Western domination of Africa. He also criticised the exchange rate of the CFA franc used by 14 countries in West and Central Africa, including Equatorial Guinea, as being fixed too low against the euro. Equatorial Guinea ranked 136 out of 187 states on the U.N.’s 2013 Human Development Index. Obiang’s eldest son Teodorin, a vice-president and potential successor, has faced corruption and money-laundering investigations in the United States and France. This year, Obiang has declared his country open for more business outside of oil and gas, widened its alliances by joining a global community of Portuguese-speaking states, and offered a political dialogue to domestic and exiled opponents. Towering new offices and residential blocks – often built by Chinese or Arab construction firms – are springing up around the verdant island capital Malabo, though many citizens still live in tin-roofed homes. “Africa is engaged in a process of democratic progress which is irreversible and adjusted to African realities, and it should not allow foreign meddling,” he said. Obiang has pointed in the past to a botched 2004 coup attempt by former British Special Forces officer Simon Mann – with financial

backing from former British Prime Minister Margaret Thatcher’s son Mark – as evidence that foreign powers want to control his oil-rich nation. To applause from fellow heads of state, including Zimbabwe’s Robert Mugabe, Obiang called for an overhaul of the United Nations system “so that it no longer serves as a support for some countries to legalise their agenda of meddling”. He also criticised the International Monetary Fund and the World Bank for facilitating “the monopolies of the world economy”. Speaking before Obiang, Rajoy said that Spain’s trade with Africa had more than doubled over the past 10 years. “Every year we buy African products totalling over 28 billion euros, almost twice as much as we export to the continent,” the Spanish prime minister said. “The more prosperous Africa, is the more prosperous Spain will be.” *Source Reuters]]>