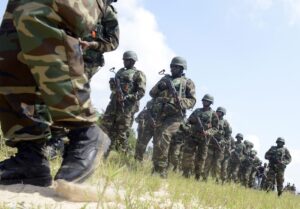 Nigeria distrusts U.S. efforts to help fight terror, while the Americans are frustrated by Ni­ger­ian military abuses. (Pius Utomi Ekpei/AFP/Getty Images)[/caption] When Secretary of State John F. Kerry announced early this month that the Obama administration was rushing a team of experts to help Nigerian officials rescue 276 abducted schoolgirls, the hope in Washington was that Nigerians would react with gratitude and energetic cooperation. Instead, the U.S. assistance mission here — cloaked in secrecy and producing only vague hints of progress after six weeks of joint efforts to find and free the girls kidnapped by Boko Haram militants — has produced a more ambivalent and critical response. One reason is the strong patriotic pride among citizens of this independent, oil-rich nation with a large professional security force that President Goodluck Jonathan said Thursday he had ordered to carry out a “full-scale operation” against the militants. While there is appreciation for the U.S. help, there is also resentment of what some Ni­ger­ian commentators call “neocolonial” meddling. “Part of it is national pride, perhaps one should say national vanity,” said John Campbell, a former U.S. ambassador to Nigeria and senior fellow at the Council on Foreign Relations. Particular umbrage has been directed at comments by two U.S. officials who have nothing directly to do with the current crisis. One is Sen. John McCain (R-Ariz.), whose sarcastic remark about Nigeria having a “practically nonexistent government” hit a deep nerve. “Let no Nigerian be fooled by these so-called friends who have ulterior motives,” read a two-page ad in last Sunday’s newspapers, signed by Muhammadu Mamman. Excoriating McCain as an ignorant “war-monger” with no knowledge of Nigeria’s proud past, he asserted that “only the Nigerian gallant forces can bring the girls back.” The second target is former Secretary of State Hillary Rodham Clinton, who is criticized here both for having failed to designate Boko Haram as a foreign terrorist organization and for making unflattering comments characterizing Ni­ger­ian leaders as corrupt and indifferent to people’s suffering. Nigerian opposition leaders make the same criticisms. They say that despite the establishment of democracy in 1999 after years of military rule, a mix of official corruption and negligence has abetted the rise of Islamist extremism in the impoverished Muslim north. “What we really need from America is help building a democratic system that produces legitimate and responsible leaders,” said Festus Keyamo, a human rights activist and lawyer. “Otherwise we are going to keep growing a mass of idle and angry youth that are waiting to wreak havoc.” In an interview with The Washington Post on Thursday, an adviser to Jonathan said the international attention surrounding the girls’ abduction has drawn “misdirected” and unfair scrutiny of a government he said is doing all it can to bring the girls home. “There appears to be a dearth of information out there about what the government of Nigeria is doing,” said Mike Omeri, a longtime political adviser to Jonathan. Omeri led a delegation of Ni­ger­ian officials to Washington this week to make the case that the Jonathan government is responding appropriately. “When this crisis started, the government of Nigeria, the people of Nigeria, had no chance to explain,” Omeri said. “We were taken to the cleaners as having done nothing and being nothing.” President Obama, speaking at graduation ceremonies Wednesday at the U.S. Military Academy, declared that “no American security operation” can eradicate terrorists like Boko Haram and that the problem requires U.S. efforts to improve education and human rights in countries such as Nigeria. Another sticking point in U.S.-Nigeria relations are the recurrent reports of abuses by Nigeria’s security forces, including the deaths of hundreds of Boko Haram detainees. Congress has banned all direct military aid to foreign forces with abusive records. Campbell suggested that “very, very few units” of the Nigerian army could pass that test today. One reason for the Nigerians’ defensive reaction to U.S. help in locating the girls “is that U.S. assistance always requires degrees of accountability, which the Nigerians don’t like,” he said. [caption id="attachment_10043" align="alignright" width="300"] 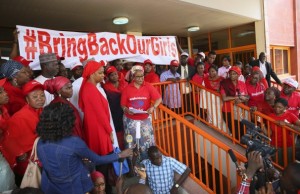 June 3, 2014 – A leader of the #BringBackOurGirls campaign addresses the group at the Federal High Court after challenging the Nigerian police’s ban on their daily protests. There was an uproar over comments by the police commissioner in which he appeared to ban demonstrations over the kidnapping of more than 200 schoolgirls by rebels. Nigerian police said later on Tuesday that protesters were free to march in the capital of Abuja.
Afolabi Sotunde /Reuters[/caption] Despite public pressure on the government to find the missing schoolgirls, there is little serious criticism of the army in Nigeria, where military rule is a recent memory and troops have been deployed across Africa as U.N. peacekeepers. In the past week, a series of highly organized rallies has been held here to express confidence in the military. Until recently, experts said, U.S. officials also tended to focus on Nigeria’s democratic progress and overlook its military abuses. By the same token, Washington did not put Boko Haram on its list of terrorist groups until last year, allowing Nigerian critics to decry its sudden policy change as a matter of self-interest.

The absence of concrete information about the U.S. anti-terror role here has fueled warnings about an American “occupation.” Photos of U.S. drones participating in the aerial search for the missing girls and their captors have added to speculation about foreign spying. American officials in Abuja have rejected all requests for comment on U.S. activities here. Nigerian officials, while hinting at unspecified “progress” in the joint efforts to track Boko Haram, have also refused to discuss any details of those activities. “What is the guarantee that ensures that Nigeria has not mortgaged her sovereignty to the Americans in an attempt to fight Boko Haram?” demanded commentator Idang Alibi. “Do the Americans have a blank check, or are there some safeguards to protect Mother Nigeria?” Such skepticism about U.S. involvement contrasts notably with the Nigeria’s strong appeal for cooperation from its neighbors to combat the spread of terrorism. At a meeting in Paris in early May, Jonathan begged for their help, saying Boko Haram had become “an al-Qaeda of West Africa.” The response was overwhelmingly positive, with the presidents of next-door Chad and Cameroon committing themselves to an all-out “war on Boko Haram.” It remains to be seen whether such statements will lead to concrete actions, but Nigerians seem convinced that regional cooperation is both more urgent and welcome then Western help in combatting terrorism. “If we as a region don’t come together to meet this challenge,” said Ike Ekweremadu, a Nigerian senator and official of the Economic Commission of West African States, in a TV interview Monday, Islamist militancy “will spread like a cancer and consume all of us.” * Sourc washingtonpost
]]>