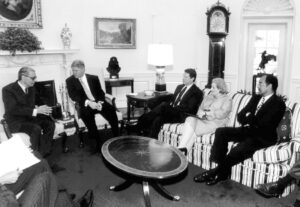 On April 12, 1994, six days after a plane carrying Rwanda’s president was shot down, setting off a wave of killings, Madeleine K. Albright, the American ambassador to the United Nations at the time, sent a cable to the State Department proposing that the United States take the lead in pushing to withdraw most of the United Nations peacekeeping force operating there.

Ms. Albright’s tersely worded cable, recently declassified, starkly captures the reluctance of the United States to respond to the deepening crisis in Rwanda. When most of the United Nations force was withdrawn shortly afterward, leaving the violence almost completely unchecked, the crisis rapidly escalated into one of history’s most grimly efficient genocides, with some 800,000 people killed in less than 100 days.

Twenty years after the genocide, the National Security Archive and the United States Holocaust Memorial Museum have obtained nearly 300 secret cables from the United States, Britain, New Zealand and other members of the United Nations Security Council during the fateful weeks when events in Rwanda spiraled out of control.

The documents, which the groups posted on their websites on Monday, offer a vivid record of closed-door debates, in which the diplomats, lacking accurate information and scarred by a disastrous military mission in Somalia months earlier, voted to pull out most of the peacekeepers at the very moment that they could have curbed the killing.

“It’s clear, in hindsight, that the pullout of peacekeeping was the green light for genocide,” said Tom Blanton, director of the National Security Archive at George Washington University, which, along with the Holocaust Museum, is sponsoring a conference this week in The Hague on how the world handled the Rwanda crisis.

Cameron Hudson, the acting director of the Holocaust Museum’s Center for the Prevention of Genocide, said, “It looks very cold and doesn’t paint any of the big countries in a good light.”

President Bill Clinton has described his administration’s inaction as one of the greatest regrets of his time in office. Ms. Albright, who has also expressed regret, said in an interview that she welcomed the release of the cables because she hoped a fuller exploration of that period would contribute to policies that would prevent future atrocities.

On April 14, after Belgium announced that it would pull its troops from the peacekeeping force in Rwanda, the Security Council debated whether to beef up the mission to help protect civilians, withdraw it entirely or scale it back to a rump force, largely for symbolic value. The United States and Britain favored the third option.

“I understood why there had been talk of protecting civilians,” the British ambassador at the time, Sir David Hannay, wrote in a cable. “But even a vastly increased and better equipped UNAMIR would find such a broad mandate difficult to fulfill,” he said using the acronym for the peacekeeping force, United Nations Assistance Mission for Rwanda.

In her April 12 cable, Ms. Albright said there was a “window of opportunity” to withdraw the bulk of the force because the airport in the capital, Kigali, was still under the control of Belgian and French troops. She advocated leaving behind a “skeletal staff that might be able to facilitate a cease-fire and any future political negotiations.”

On April 21, after a week in which 10,000 Rwandans were killed in Kigali alone, the Security Council voted to reduce the size of the force to 270 troops from 2,100. The remaining peacekeepers found themselves “standing knee-deep in mutilated bodies,” said Roméo Dallaire, the Canadian general who commanded the United Nations force.

Ms. Albright said she did not recall the specific cable pushing for a withdrawal, but she confirmed that the White House, and even more so Congress, were deeply leery of getting more involved in Rwanda after the United States’ disastrous experience in Somalia, where two Black Hawk helicopters were shot down, setting off a firefight that left 18 Americans dead. The bodies of several soldiers were dragged through the streets of Mogadishu.

At the National Security Council, Richard A. Clarke, a counterterrorism adviser to Mr. Clinton, was trying to scale back American involvement in United Nations peacekeeping operations, in part to fend off lawmakers who wanted to end them altogether.

One of the missing pieces in the newly declassified trove of documents, researchers said, are roughly 100 internal White House emails on Rwanda, which would shed light on the marching orders Ms. Albright was getting from the White House.

These emails are held by the Clinton presidential library, Mr. Blanton said, but the White House has not signed off on a declassification request he submitted nine months ago. “The American declassification system does not have any rationality built into it,” he said.

But the other declassified cables offer a window into African countries’ frustration with the West’s reluctance to act. On May 5, 1994, the ambassador from Nigeria, Ibrahim Gambari, who was then leader of the Security Council, warned that it needed to do something very soon; otherwise, it would be a “laughingstock.”

Ms. Albright said Mr. Gambari’s arguments persuaded her that the United States risked being on the wrong side of history. At one point, she left a Security Council meeting and placed a heated call to Washington to resist its demands for a complete withdrawal.

“I wanted to have more flexibility,” she said, “but the options for having a large operation were so difficult.”

Even if the political will for major intervention had existed, by that time, it was probably too late to prevent Rwanda from becoming a charnel house. But for the leaders today, who are confronting mass violence in Syria, South Sudan and the Central African Republic, Rwanda stands as a cautionary tale of what happens when the world dithers.

“We struggled through this in Darfur and the Balkans,” Mr. Hudson said. “Now the knee-jerk reaction is to get more troops in, to smother the violence before it breaks out.”