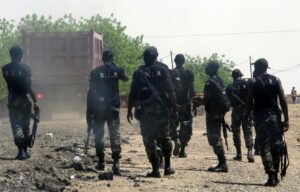 Armed Cameroonian men of the rapid intervention battalion (BIR) patrol in Waza, northern Cameroon on May 29, 2014 (AFP Photo/Reinnier Kaze)[/caption] Waza (Cameroon) (AFP) – With a famous nature reserve, elephant safaris, and a reputation as a peaceful haven, the small town of Waza in the far north of Cameroon used to buzz with tourists.

Today, it is like a ghost town. The walls of the hotels are crumbling and guest bedrooms remain stubbornly empty. By early evening, one local official says, the streets are deserted.

Located just a few kilometres from the border with Nigeria, Waza has been gripped by “general panic” since an attack by suspected Boko Haram Islamists who kidnapped ten Chinese in mid-May, said the secretary-general of the town, Tandjo.

The security forces searching for them believe they were quickly taken back over the border, to the northeastern region of Nigeria that has become Boko Haram’s stronghold.

It was the latest in a series of incursions into northern Cameroon by the group, who officials say take advantage of a porous border to evade detection.

Boko Haram, whose name means “Western education is forbidden”, has killed thousands since 2009 in its fight to establish an Islamic state in the north of Nigeria.

As well as the kidnapping of 200 schoolgirls, it has burnt down entire villages and launched deadly gun attacks, and the violence has not been contained by the border.

Cameroon’s President Paul Biya has declared “war on Boko Haram”, and is sending military reinforcements to the region to try and combat the group. Some 1,000 troops are expected to start arriving Monday.

The soldiers will be welcome in places like Waza, but they may not be enough to rescue the town’s crumbling tourist industry. 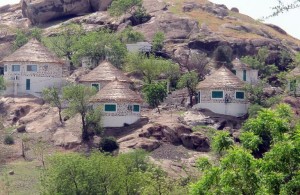 Photo taken on May 28, 2014 shows the site in Waza, northern Cameroon, where 10 Chinese workers were abducted by Boko Haram on the night of May 16, 2014 (AFP Photo/Reinnier Kaze)[/caption] It was on the night of May 16 that suspected Boko Haram gunmen targeted Waza, killing a Cameroonian soldier before abducting ten Chinese road workers from their camp.

“The night of the attack, the town was shaking with all the gunfire,” said a 20-year-old Cameroonian who worked with the Chinese and did not want to give his name.

A few weeks on, tensions are still high. Standing guard at the entrance to the camp, a member of the Rapid Intervention Battalion, an elite unit with the Cameroon army, shouts at the driver of a motorbike headed his way.

“Go back!”, he shouts, his arm hovering over the trigger of his gun.

“You should get out of here,” another soldier tells AFP. “We are in a war situation.”

Not far away, two soldiers patrol in front of the construction site where machinery has stood still since the hostages were taken.

Some 22 people have been killed by the Cameroonian army in the aftermath, their bodies, local officials say, also smuggled back over the border by their accomplices.

Tandjo says the town’s residents are terrified of another attack.

“People are traumatised,” he says. “They knew about Boko Haram, but they had never witnessed one of their attacks.”

“From 7pm, people go home and do not leave again,” he says.

Most officials have moved their families to safer areas. One had a heart attack after a bullet tore through his courtyard, says Tandjo.

“There is fear here. We are afraid that there will be another attack”, said the young road worker, one of the few people from the town who is happy to talk about what happened. He has not worked since the raid, and today, sits under a tree, hoping for a change of fortune. [caption id="attachment_9646" align="alignleft" width="300"] 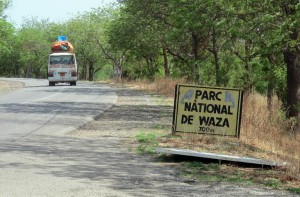 Photo taken on May 28, 2014 shows the entrance to Waza National Park, northern Cameroon, where 10 Chinese workers were abducted by Boko Haram on the night of May 16, 2014 (AFP Photo/Reinnier Kaze)[/caption]

During the night, no one is allowed to ride around by motorbike — Boko Haram’s preferred method of transport — in the entire north-east region of Cameroon.

For a once-buzzing tourist town, the change is devastating.

Andre Ndjidda, who works in the Waza National Park, one of the most well-known in Cameroon, says hardly any foreign visitors have ventured there in months, after a series of kidnappings in the far north region.

The trouble in this part of the country, which once had a reputation for tranquility, started in 2013, when Boko Haram claimed responsibility for the kidnapping of the priest Georges Vandenbeusch and the Moulin-Fournier family from France.

They were later released, but their kidnapping made headlines around the world.

“The fate of the park was already decided,” said Ndjidda, of those kidnappings. “(But) The abduction of the Chinese workers sealed the fate for the town.”