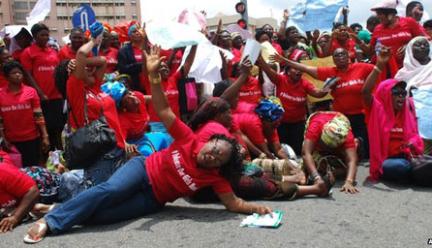 A demonstration against Boko Haram calling for the release of 200 girls abducted in April. The Hausa community in Cameroon has formed a new group to help fight the Nigeria terror gang. FILE | NATION MEDIA GROUP[/caption] Ethnic Hausa Muslims in Cameroon have joined the country’s war against Boko Haram whose radical creed forbids Western education by spreading an opposing ideology called Boko Halal.
“In the Hausa language, it means Western education is permissible; the quest for knowledge, justice, progress, peace and development,” says Cheikh Oumarou Malam Djibring, a member of Cameroon’s Council of Imams and Muslim Leaders.
The Hausa, West Africa’s largest ethnic group, live mainly in northern Nigeria, southeastern Niger and north Cameroon, areas believed to be the sect’s strongholds.
They are also found in parts of Cote d’Ivoire, Chad, Togo, Ghana and Sudan.
Officials from Cameroon’s northern regions have been holding meetings to drum up support against Boko Haram after President Paul Biya and four regional leaders declared war on the sect at a meeting in Paris on May 17.
Paramilitary police
At a recent forum on Islam, education and peace in Yaoundé, the Hausa in Cameroon, under the banner of their association, Ya-Kamata, said they would henceforth promote Boko Halal.
“We denounce all obscurantist practices carried out in the name of Islam,” said Ya-Kamata leader El hadj Oumarou.
“We will support President Paul Biya’s offensive against the Islamic sect Boko Haram until the situation is pacified.”
President Biya and Chad’s Idriss Deby sent 1,000 troops to their borders with Nigeria at the end of May shortly after they met in Yaoundé to devise an anti-Boko Haram war plan.
Cameroon’s ministry of Defence says almost 3,000 troops and paramilitary police will be deployed in the area progressively.
In a renewed push in its fight to establish an Islamic state in the north of Nigeria, the sect received widespread international attention and condemnation after it abducted more than 200 girls from a school in April. *Source Africa Review
]]>