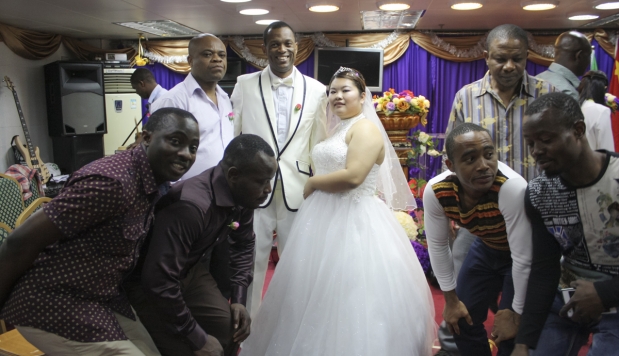 JENNIFER TSANG AND EMAN OKONKWO AT THEIR WEDDING IN GUANGZHOU IN APRIL. PHOTO: JENNI MARSH[/caption] Eman Okonkwo’s foot-tapping at the altar is not a sign of nerves. The groom’s palms aren’t sweaty, there are no pre-wedding jitters and certainly no second thoughts. Today he is realising a dream imagined by countless African merchants in Guangzhou: he is marrying a Chinese bride. Seven days earlier, Jennifer Tsang’s family was oblivious to their daughter’s romance. Like many local women dating African men, the curvaceous trader from Foshan, who is in her late 20s – that dreaded “leftover woman” age – had feared her parents would be racially prejudiced. Today, though – having tentatively given their blessing – they snuck into the underground Royal Victory Church, in Guangzhou, looking over their shoulders for police as they entered the downtown tower block. Non-state-sanctioned religious events like this are illegal on the mainland. Okonkwo, 42, doesn’t have a single relative at the rambunctious Pentecostal ceremony, but is nevertheless delighted. “Today is so special,” beams the Nigerian, “because I have married a Chinese girl. And that makes me half-African, half-Chinese.” In Guangzhou, weddings like this take place every day. There are no official figures on Afro-Chinese marriages but visit any trading warehouse in the city and you will see scores of mixed-race couples running wholesale shops, their coffee-coloured, hair-braided children racing through the corridors. While Okonkwo’s dream of becoming Chinese through matrimony is futile – the Guangzhou Public Security Bureau (PSB) denies African husbands any more rights than a tourist – his children, should he have any and they be registered under Tsang’s name, will possess a hukou residency permit and full Chinese citizenship. The relationship with Africa that China has so aggressively courted for economic gain – 2012 saw a record US$198 billion of trade between the pair – is producing an unexpected return: the mainland’s first mixed-race generation with blood from a distant continent and the right to be Chinese. “CHOCOLATE CITY” OR “Little Africa”, as it has been dubbed by the Chinese press, is a district of Guangzhou that is home to between 20,000 and 200,000, mostly male, African migrants (calculations vary wildly due to the itinerant nature of many traders and the thousands who overstay their visas). Africans began pouring into China after the collapse of the Asian Tigers in 1997 prompted them to abandon outposts in Thailand and Indonesia. By exporting cheap Chinese goods back home, traders made a killing, and word spread fast. Guangzhou became a promised land. It is easy to believe that every African nation is represented here, with the Nigerian, Malian and Guinean communities the most populous. But Little Africa is a misnomer; in the bustling 7km stretch from Sanyuanli to Baiyun, in northern Guangzhou, myriad ethnicities co-exist. Uygurs serve freshly baked Xinjiang bread to Angolan women balancing shopping on their heads while Somalis in flowing Muslim robes haggle over mobile phones before exchanging currency with Malians in leather jackets, who buy lunch from Turks sizzling tilapia on street grills, and then order beer from the Korean waitress in the Africa Bar. Tucked away above a shop-lined trading corridor, the bar serves food that reminds Africans of home – egusi soup, jollof rice, fried chicken. Whereas Chungking Mansions conceals Hong Kong’s low-end trading community, in dilapidated Dengfeng village – Little Africa’s central thoroughfare – the merchants, supplied by Chinese wholesalers, are highly visible. And it’s in this melee of trade where most Afro-Chinese romances blossom. 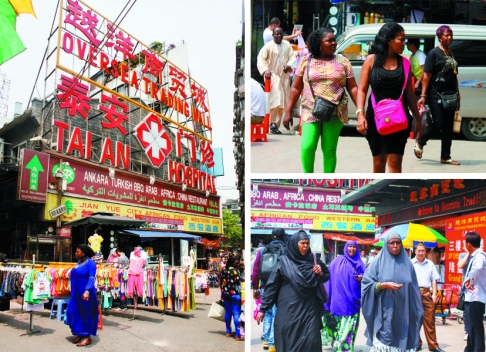 The Overseas Trading Mall, in Dengfeng village, attracts hordes of African merchants.[/caption] The Nigerian sighs. He feels “slighted” by repeated assumptions his eight-year marriage is economically motivated. He met Winnie, a native of Guangdong province, at church and the pair are united in their evangelic mission (“God knows it’s China’s time,” he says). Winnie, 34, is a pastor at the church’s 100-worshipper-strong Chinese arm while he leads the larger African congregation. Their tactile body language speaks volumes about their union. Michelle Zhang Nan, 35, doesn’t fit the profile of a trader’s wife, either. When we meet at McDonald’s, she is dressed in an expensive A-line dress and kitten heels. Her three-year-old son, Calvin, trails behind as she carries a tray of Big Macs and milkshakes. A university graduate whose parents are government officials, Zhang lives in Guangzhou but has a prized Beijing hukou and owns a phone-battery retail business. “I liked the way he did business,” she says, of falling in love with her South African husband. “If I was married to a Chinese man, I could not be a strong woman like I am today. My husband is 11 years older and he teaches me.” She notes that a Chinese man would benefit equally from taking an African wife, but that is unheard of in Guangzhou. As one bootylicious Liberian hairdresser, who works on the third floor of a tower block, says, “Chinese men aren’t manly, they aren’t sexual to us.” (East African prostitutes working in Little Africa, however, report that 50 per cent of their clients are Chinese men who “want to try it”, according to Matthews.)
“Marrying a foreigner is a way to upgrade their social status, because the Africans have money”
But a Chinese wife cannot solve an African migrant’s biggest problem: his visa. Happy families can be swiftly torn apart if the PSB denies a continuation on an African husband’s temporary documents. The central government pointedly lacks an immigration department, meaning there is no framework for the assimilation of newlyweds such as Okonkwo. Policy differs from province to province and, compared with those in other Chinese cities, the Guangdong authorities are notorious for their hostile and inconsistent attitude to African migrants. Throughout the two months I conducted interviews, African husbands reported getting a variety of visas. Nigerian businessman Tony Ekkai – who has two Afro-Chinese children – has a “representative office” of his Hong Kong-registered business in Guangzhou, and therefore is entitled to a coveted one-year, multiple-entry business visa. His Nigerian friend Tony Michael, also married to a Chinese woman, with a two-month-old son, is despondently stuck on three-month visas. Six-month, single-entry visas are all Zhang’s husband has seen. Many, like Ousagna, return to their wives’ provinces to renew their visas, to evade the capricious Guangzhou authorities. Others – such as Guinean trader Cellou, who has a one-year residence pass – say their country’s good political relationship with Beijing helps their visa applications. Guinea was the first sub-Saharan country to forge diplomatic ties with China, and Cellou, who studied business at the International Islamic University Malaysia, spots the glaring double standard: “If my [Chinese] wife stays in Guinea she can get a Guinea passport.” African states – home to millions of Chinese, also often undocumented – are watching closely to see how their citizens are treated on mainland soil. After a 2012 crackdown in Beijing on African migrants, Nigerian immigration authorities immediately retaliated, arresting 45 Chinese traders in the northern city of Kano. With so much at stake for Sino-African relations, Beijing is playing a cautious game. Lan Shanshan, a research assistant professor at Baptist University, claims there is a media edict on the mainland to report favourably on Africans in China, hence the state-owned newspaper Guangming Daily‘s three-part special titled “Friends From Africa, How are You Doing in Guangzhou?”, in 2012.
“My mother-in-law helps look after the children, and she is poisoning them against Africa”
But a WikiLeaks cable from 2008 revealed that the central government is troubled by the phenomenon, and quietly funded covert research into Africans in Guangzhou, specifically their impact on crime, underground religion and missed tax revenue. The American diplomat who wrote the cable to Washington was not privy to the findings. In 2011, the government dropped its poker face with the ground-breaking Guangdong Act, which offered rewards to Chinese who snitched on overstayers; made it illegal for employers, hoteliers or educational institutes to serve illegal migrants, and insisted they report all cases to the PSB or face a 10,000 yuan fine; and expanded police powers so that any officer, not just members of the foreign affairs department, could stop foreigners to verify passports. Even those with valid visas were rattled. A Ugandan told Lan, “A visa is not a 100 per cent guarantee here. When police stop you, if you do not look like a pleasant person to them, they may draw the line on your visa and cancel it. They say, ‘China gives, China takes.'” [caption id="attachment_9641" align="alignleft" width="486"] 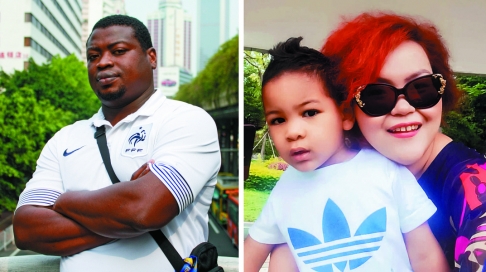