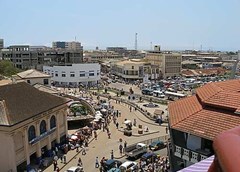 http://www.cnbcafrica.com/news/special-report/2014/06/10/accra-boasts-highest-inclusive-growth-potential/[/caption] Ghana’s capital city has the highest potential for inclusive growth in Africa, according to the 2014 MasterCard African Cities Growth Index. “For the second year, Accra ranked well across the assessment criteria and received one of the highest governance scores,” said University of South Africa professor and co-author of the African Cities Growth Index (ACGI), George Angelopulo. “The city is not Africa’s most populous or richest in terms of per capita GDP, but has made progress towards conditions that are conducive to inclusive urbanisation.” (READ MORE: Ghana hits a roadblock as fiscal instability undermines growth) He added that while the city, and Ghana as a whole, does face macroeconomic challenges, the country has had four successful elections following a peaceful transition of power in 2000. “The ACGI affirms the importance of advancing and protecting individual freedoms to ensure ongoing economic development,” said Angelopulo. The index looks at several historical and forward-looking indicators to rank a city’s level of inclusive urbanisation, forecasting potential for inclusive growth. Other historical factors include GDP per capita growth, political stability and absence of violence, regulatory quality, rule of law, the ease of doing business and population growth, to name a few. Gross fixed capital formation, the availability of electricity, health and education, foreign direct investment and mobile subscriptions form part of the forward-looking indicators. MasterCard Center for Inclusive Growth’s chief economist, Yuwa Hedrick-Wong said, “Inclusive growth occurs when the benefits of an expanding economy are widely shared with the population.” (READ MORE: Growth projected for Africa in 2014) “We believe that inclusive urbanisation is a prerequisite for inclusive growth, and so the ACGI is a lens through which African cities can be assessed as future investment destinations,” he added. Casablanca in Morocco and Freetown in Sierra Leone ranked second and third in the large city category, along with Accra, while Tunis in Tunisia is the top ranked medium city, followed by Libreville in Gabon and Nouakchott in Mauritania. São Tomé in São Tomé and Príncipe ranks highest in the small city category, followed by Victoria in the Seychelles and Port Louis in Mauritius. The index also noted that the large and medium cities with the highest inclusive growth potential are located predominantly in North and West Africa, while the small cities with the highest rankings are located in Africa’s island states. * CNBC Africa]]>