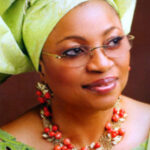 folorunso-alakija[/caption] Some of Africa’s most influential and wealthiest women will converge in Nigeria on Saturday for a conference to empower the next generation of female leaders. The WIE Africa Symposium in the commercial capital of Lagos brings together trailblazers from the world of business, entertainment and the fashion industry. The day will be packed full of panels, workshops and networking opportunities, featuring women from across the continent but also high-flyers who have flown in from the States. CNN’s Isha Sesay, Arise TV’s Lola Ogunnaike and the CEO of Johnson Publishing Company, Desirée Rogers, are all scheduled to attend at the Intercontinental Hotel. “I am delighted to be part of the exchange,” said Rogers. “We have always covered Africa, and I hope to do more of that in the future with Ebony Magazine.” “I want to see more women in leadership positions across all industries,” said Dee Poku, a Briton of Ghanaian heritage, who co-founded Women: Inspiration & Enterprise [WIE] after moving to New York. “There isn’t one industry that I can think of where you can say there’s a balance in terms of male and female leaders,” she said. “Even in female industries like fashion or publicity, it’s predominately men at the top.” Handpicked speakers who have come from across Africa include Nigeria’s first female billionaireFolorunsho Alakija, who recently unseated Oprah as the richest black woman in the world. Others are media mogul Mo Abudu, philanthropist Toyin Saraki, business leader Bola Adesola and fashion designer Folake Folarin-Coker, to a name just a few. “I look forward to both contributing and listening to other successful female entrepreneurs as we share experiences of what I am sure will be an informative event, motivating and inspiring the next generation,” said business tycoon Alakija, who will give a talk on entrepreneurship and growing a business. “This is almost like mass mentorship in a way, where you can sit in a room and hear from someone who you perhaps aspire to be,” said Poku, referring to the ambitious and aspiring crowd who attend WIE events. “We ask all the speakers to be really open and honest about their own journey,” she adds. “We want to hear the specifics. Really nuts and bolts information that women who aspire to be, can really draw from, really learn from and use in their day to day lives.” Poku said she was inspired to launch the WIE Symposium because of personal experiences in the corporate sector, where she often wished there was a forum to help her navigate the obstacles she faced. “I just thought, wouldn’t it be great to give women like me, and younger women coming up, access to women who’ve achieved?” This is the second time that the WIE Symposium will be venturing into Africa following its successful launch in Cape Town, South Africa, last year.  The event in Nigeria is timed to coincide with the World Economic Forum Africa. WIE, founded in 2010, is a global annual conference (most often taking place in New York) and community designed to empower the next generation of women leaders. The WIE Africa will showcase women taking a central role in shaping the continent and aims to contribute towards changing negative perceptions of Africa as a whole by presenting successful African women and innovation. “Right now it’s a really interesting time in Africa,” said Poku. “There’s an economic boom, there’s a lot of money floating around. I wanted to be there to pull women in the workforce, so they don’t get left behind in these so-called good times.” Still, Poku acknowledges, throughout the continent “other sorts of abuses toward women still need to be addressed by informing and educating women of their rights and role in society.” Over the years, the WIE Symposium has attracted some of the most impressive women from around the world, including: Graca Machel, Nancy Pelosi, Iman, Sarah Brown, Donna Karan, Ariana Huffington, Jennifer Buffett, Lauren Bush, Cherie Blair, Jill Biden, among others. *Source The Griot Follow Kunbi Tinuoye on Twitter at @Kunbiti]]>